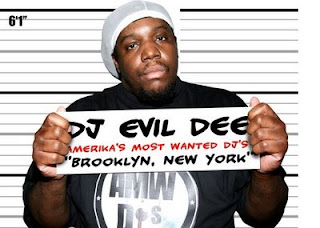 This tape (only 40 mins long unfortunately) is one of my favourites for the following reasons:
- E Rule's 'Listen Up'.
- Evil Dee cutting up Zhane & Blackgirl acapellas over Gang Starr and Wu Tang beats and scratching his name check on 'Crooklyn'.
- Its got the world premier of Black Moon's 'Murder MCs', straight off the DAT from D&D studios.
- Buckshot drops a freestyle over the 'Kaught In Da Ak' instrumental.
- The phoned-in shout-outs give it an authentic mid-90s NYC feel and I like that sort of thing.
Considering this is from 1994 (one of the best years ever for quality Hip Hop) its strange that Buckshot mentions "taking Hip Hop back". He obviously had no idea what the future held and that any DJ playing a Bootcamp Click b-side on daytime Hot 97 in 2009 would be fired.

Wish I had the first part of the show but the other side of the tape (courtesy of DJ MK way back in the day) is Roc Raida tearing it up on Funk Flex's show. I'll drop that soon.
Posted by step one at Monday, March 16, 2009