tracklist below (any help with missing tracks appreciated)

I never really delved too deep into the whole Stones Throw thing so I'm not massively familiar with Peanut Butter Wolf, but here he is in the mix on Gilles Peterson's Worldwide show on Radio 1 mixing up some hip hop, soul, breaks and quirky shit, which was very much the style at the time.

I never checked Gilles Peterson's show much at the time either, as it was hella Jazz Club for the most part, but every now and again he'd get some rap people on there. I believe one of my fellow tape rip blogger dudes might be dropping some of those shows in the future, once he's filtered out all the tabla, bongo and sitar business.

I haven't had time to do anything blog related recently so here's some things that have appeared online elsewhere that may be relevant to your interests...

oh, and here's a video for Sugarbear's 'Dont Scandalize Mine' 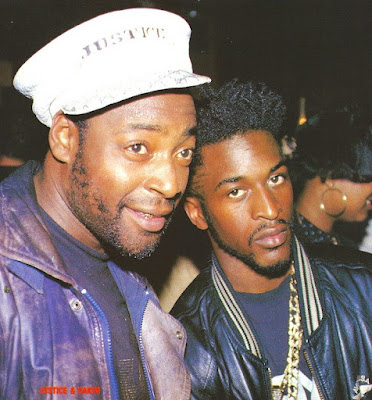 Big Ted and Shortee Blitz drop tracks by Erick Sermon, Cam'ron, Jadakiss and Young Gunz, plus the excellent Bangers by Alchemist and Lloyd Banks. SAS and Mr Complex are the studio guests.
Posted by step one at Friday, March 16, 2018 No comments:

The tracklist for this isn't entirely dissimilar to this one that I posted last month so it's fair to say it's from the week before or after. Decided to post it up anyway because Tim goes into the Capital Rap Show archives not once but twice and pulls out an old Cash Money & Marvellous session and a freestyle by Chill Rob G, Queen Latifah and the Jungle Brothers, both of which I assume are from the late 80s or possibly 1990 in the case of the latter (which I posted on it's own years ago). There's also a few exclusives like the Rakim track and Mobb Deep's 'We About To Get Hectic' which didn't see the light of day until 2014. Another gem that never made it to the shelves is the track by Passion, which apparently was intended for a Def Squad project that got shelved, which is pretty nice if you like that mid 90s G-Funk vibe. Oh, and you get the lesser spotted friday night intro (before the ODB 'Its friday...yes its friday' became the standard).

And so we have the first appearance on OB4ZL for Dave Pearce's rap show on Greater London Radio. Most people in the UK are familiar with Dave as he spent the latter part of the 90s and early 00s doing big things on the dance music side of things having moved to Radio 1 from Kiss FM. Prior to that his voice was immortalized on Public Enemy's 'It Takes A Nation Of Millions...' - that's him on the album's intro introducing them at the Hammersmith Odeon - which is quite impressive in itself, but he was also involved with the premium rate phoneline that eventually gave birth to HHC magazine.
The selection on this tape is a mix of UK and US, with the hardcore/underground stuff like Schooly D, ATCQ and Gang Starr getting play alongside the likes of Wrecks N Effect and Redhead Kingpin. There's even a bit of Hip House by way of Tyree's Turn Up The Bass (Kool Rock Steady RIP). DJ Chin and DJ KCJ are on the mix and there's lots of shout outs on the phones and his regular MC competition where listeners could call in and show off their skills, or lack of, by doing a rap on a specific subject (this week: the environment). Bask in the innocence of a simpler time and speculate on what became of Rebel from Farnborough and his crew.
I left the news report in and tried to get a better idea of the date by googling the stories but no joy. If anyone can pin point it (consensus seems to be around July - September '89) or help me out the track list let me know.Shout to the DWG boys that helped fill in the blanks on the tracklist and to Robin in the mixcloud comment section who's putting the date at 11th August 1989.

The world premier of Still DRE kicks things off here, and if you heard it at the time you'll probably remember it well as it's played 3 times back to back in it's entirety (and again in the last hour).

Phife Dawg and Lootpack are in the studio for part 2. Westwood posted up the freestyle from this already if you want it straight from the DAT.