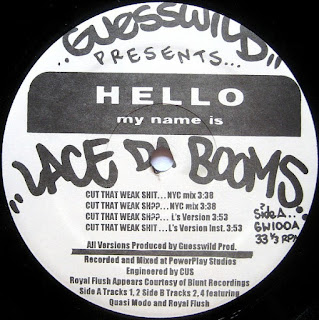 This came out as the first release on Guesswhyld, back in 1996 when indie rap wasn't an entire sub-genre in itself, and the records still looked 'indie' - no glossy covers or barcodes. If you were one of those people propping up the counter at the likes of Mr Bongo or Handspun (or in the US, Fat Beats) you'll probably be familiar with it, but for the uninitiated...

There's a few different mixes on the 12" but the go to one has to be the NYC mix. It uses the beat from Kane's 'Young Gifted And Black' and has an early guest appearance from Royal Flush, who drops a dope verse. It's some proper traditional mid-90s East Coast rap and should not be slept on.
If you still buy vinyl, this is represents pretty good value for money - L's version used the same Kane beat but has different lyrics and no Royal Flush, plus you get the instrumental. The b-side has the Buckwild mix which is in a similar style to his remixes of Mad Izm and Daaam. Not entirely my bag but alot of people seem to enjoy those beats. The Domingo produced 'Aint No Secret' ain't bad either.

Additional notes: If you check the label, you'll see this also features Quasi Modo, who is/was part of Flush's Wastelanz crew and nothing to do with Madlib.
Also, I've just spotted that the label says Guesswild and not Guesswhyld, which became the label name for future releases. Not really important but record nerds enjoy that kind of thing.

BONUS! I recently picked up a cheap copy of this Guesswhyld compilation as I wanted a CDQ of Cut That Weak Shit. Turned out it was the Buckwild mix so here it is if you want it.
Posted by step one at Saturday, April 30, 2016 2 comments: 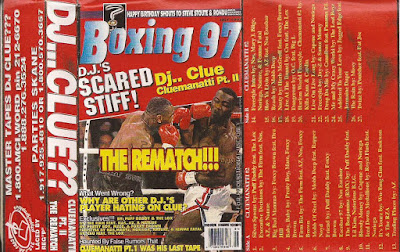 Some nice stuff on here, in particular the intro to side 2 which is some sort of special done for Steve Stoute's birthday by Nas, Mary J, Noreaga and Femme Fatale. There's also freestyles by Cam'ron & Cardin and Jay Z & Sauce Money aswell as joints by The LOX, Puffy, Foxy Brown, AZ, Mobb Deep and CNN.

Think the rip came out ok but there might be one or two parts where the sound jumps. Haven't played it back in full yet so if its unbearable let me know.
Posted by step one at Thursday, April 21, 2016 No comments:


Haven't had time to blog much recently but I've been wanting to do this post for a while, and seeing as I recently got engaged (to an actual real life female woman) I thought now would be appropriate!
I didn't know too much about The Art Of Noise until I checked their wikipedia page just now, but I did know that tha gawd Trevor Horn was involved and that in Moments In Love, they created one of Hip Hop's most enduring samples. The track as been used by everyone from King Sun and LL to Max B and Juicy J and pretty much always sounds great. If you want the full list you can go to Who Sampled but here's my picks of the bunch:

Didn't see that last one coming did you? The original stands up as a great track in it's own right, and is pretty much impossible to sound bad over (see also: Ike's Mood and Everybody Loves The Sunshine). I first discovered it when it was sampled by by Italian cut & paste outfit JT & The Big Family on their 'Moments In Soul' track which did good business in the UK in 1990, off the back of the whole Balearic/Summer Of Love thing. I couldn't find the right version of it on Youtube but I'm using it on a forthcoming mix. As you can see from the list, it's use has transcended Rap's regions and sub genres. In more recent times it's been predominantly enjoyed by the Southern states, probably due to the tempo. Those Dipset lads aren't shy of  using it either.
The track's impact is somewhat overlooked as its not the standard UBB fodder thats been rinsed to death by DJs and freestyle ciphers but maybe that's whats given it more longevity than Apache or The Big Beat, and for that we should be thankful.
If there's any decent songs I've missed feel free to link them in the comments section. 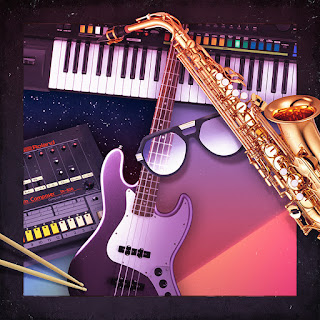 After a series of essential mixes, Sparkle Motion take it to the next level...

Known for their expertly-crafted mixes and deep knowledge and appreciation of 80’s and 90’s Hip Hop and R&B, SPARKLE MOTION take their first foray into the world of original production with the release of MAKE THE MUSIC, a dazzling exploration into a world of filtered R&B vocals, golden-era rap samples, masterful keyboard arrangements and bouncy 808 bass lines.
This strictly all-instrumental beat tape draws on a variety of influences and artists, from BABYFACE to LEVEL 42 via CAM'RON and BOOGIE DOWN PRODUCTIONS.
Armed with a magic bag of samples that might only be identified by the most seasoned crate-digger, this is essential for fans of KENNY DOPE, ARMAND VAN HELDEN, MARK RONSON, ONRA and DAFT PUNK, while also appealing to instrumental junkies and beat-heads alike. From the spaced out, intergalactic vibes of ASTRO BREEZE to the pounding, synth odyssey that is TECH NOIR, MAKE THE MUSIC is a full, electronic turbo-charge of sophisticated compositions and melodies, arranged to give a retro feel while keeping things fresh, modern and cohesive. CRUISE CONTROL finds us riding shotgun on a misty tropical highway among the stars; soothing chords and the perfect bass guitar lick make it sound like something you'd find on a modern day OUTRUN soundtrack, while the title track MAKE THE MUSIC - featuring whirling police sirens, firey synthesizers and the perfect old-school rap vocal - wouldn't sound out of place on the soundtrack to a remake of ESCAPE FROM NEW YORK. Another highlight is the uptempo, soulful disco thump found on INSPIRATION, which borrows the perfect vocal chop from one of pop music's all time greats - while also paying respects to the “French Touch” sound of the mid to late 90’s.

Indeed, showing respect and appreciation is what MAKE THE MUSIC is all about - SPARKLE MOTION pay homage to the artists and sounds they obviously loved and listened to growing up, while creating something new and unique that sounds like little else right now.
Posted by step one at Wednesday, April 13, 2016 No comments: 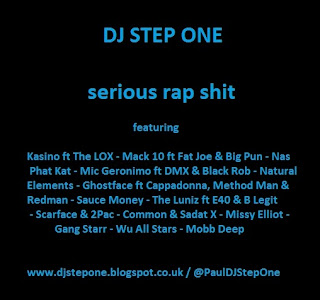 First of the month today so it's a new mix from me. Been listening to a fair bit of late 90s rap over the last few weeks, and picked up a few new records on a recent trip to London so I delved into that section...

A quick run down then. 'Men Of Respect' is one of my favourite LOX tracks (I think Kasino was originally a member of the group at one time but don't quote me). Also, I'm pretty sure its the song where Jadakiss coined the phrase "top 5 dead or alive". Mack 10 is distinctly average but had a good eye for a collaboration and has a few gems in his catalogue. The bootleg remix of 'Hate Me Now' is from a 12" I picked up last week and gives the song a more subtle vibe so it works quite well in a mix like this. Phat Kat's 'Don't Nobody Care About Us' is an awesome early Jay Dee production that I was after for years and finally got a few months ago. The Natural Elements joint is borderline jiggy and sounds slightly Neptunes-ish. Been enjoying that since hearing it on a J Grand tape I posted last year. The blend of Scarface & 2Pac over Doom's 'Red & Gold' instrumental works nicely (considering I hadn't done it before) although the chorus comes in mad loud and drifts off beat slightly. Might work on that and post it as a seperate track. Mighty Mi's remix of GOD Pt III using the Doug E Fresh sample is great and possibly better than the LP version. In hindsight I would probably have switched the sequencing round a bit and had the Luniz & Missy next to each other but the whole point of these mixes is that its a one take mix that serves as a playlist that might put you on to some music you might not know, rather than something I've agonised over for months.

I've had a few problems recording audio recently as the programme I use keeps buffering. As a result there's 3 or 4 glitches where the song skips slightly. Working on resolving the issue (think its to do with latency - any tips let me know) but didnt want to not post anything in the meantime. if you fund any tape rips  I've dropped in the past few weeks where its particularly bad then leave a comment in the relevant post.
Posted by step one at Friday, April 01, 2016 No comments: