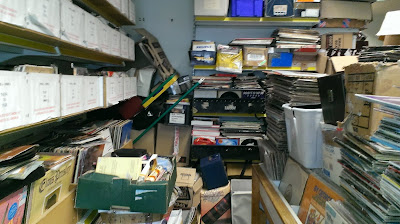 A couple of weeks ago I dropped that big ass zipfile of random 90s joints that you might've forgotten about, should play more often, or not heard before. It was pretty popular so here's the early 00s edition.
It took a bit of thinking about it because whereas during the 90s I feel like we were mostly all on the same page (or at least aware of the majority of releases), by the time Y2K hit things were about more than NY and LA and people were finding their listening niches and picking sides. Going through my folders from 2000-2003 there's the established A-list artists you'd expect, alongside underground indie joints (both backpack and more thugged out), and artists from all over the US, plus the UK too as that was doing quite nicely at the time. I was definitely a lot more open minded back then, possibly as a result of being in my early 20s and generally being  less cynical about things but also because I worked in a Virgin Megastore so I had plenty of time to investigate any release that looked interesting. That's how Blackalicious ended up on here, as Blazing Arrow was one of the few rap albums I could play in store to disrupt the playlist of Sophie Ellis Bextor, Wheatus and Robbie Williams. It was also a time of hitting up the bargain bins in various 2nd hand record shops and picking up anything that looked like it might be something. Discogs and the "vinyl revival" have pretty much killed that experience off for good unfortunately

I was going to do a brief write up on each track but that's a bit much. If there's anything you want to know just ask..

The photo was taken in a shop that I found one of the above records in. It's a complete health and fire hazard that makes NYC's The Thing look like Ikea and I can't believe it hasn't been closed down but an hour or so of awkward physical contortions and inhaling all manner of nastiness yielded a result or two so, y'know, appreciate that.
Posted by step one at Wednesday, January 30, 2019 3 comments:

It's not Epic it's Rocafella!

Live from Sylvia's in Harlem, Westwood hosts Cam, Juelz and Jim who drop a freestyle over The Roc (Just Fire) and What Happened To That Boy and Cam does his lyrics from Down & Out (2 years before that came out). Keith Murray is also in the building alongside 50 Grand for some more freestyle action.

On a related note, another Radio 1 Rap Show from the year before threw up this oddity on the Top 10 At Ten. It's a remix of Oh Boy, that despite being dismissed by Just Blaze* as a "fake DJ trickery attempt", is actually pretty decent and definitely better than the official 'Oh Girl' remix. I've no idea where the Cam verse came from if it wasn't done for this track but he's accompanied by 2 other dudes who despite sounding like State Property, appear to go by Frank Mueller and TD (Ted Dibiase?). Can't find any info on  them or this version so if anyone can help out please do.

This has been sitting on my hard drive for ages and I've no idea where I got it from* but it made me realise that I miss the days of finding Hot 97 freestyles online and on mixtapes. Hearing BR do his verse from Let's Get It over the Keep It Thoro beat is a highlight. Full 30 mins above, freestyle (with DL link) below...

*think it was off the Grime & Lime forum when that was briefly popping last year. Forget who posted it but as a significant amount of bits shared on there originated from this very site I don't feel too bad. Thanks anyway.
Posted by step one at Wednesday, January 16, 2019 1 comment:

You a slave to a draft in my Macbook. Just realised I haven't posted this year so far and I'm already into what will probably be the last couple of months of this site - I'm trying to wrap it up at 1000 posts and/or the ten (ten!) year anniversary -  so here's a random bunch of 90s tracks that I've discovered or rediscovered over the last however long, plus a few long time faves that I feel should get more shine. It's like an extended Don't Sleep but somewhat restricted by what's on YouTube. Having realised how much stuff isn't on there I might make that my next project.