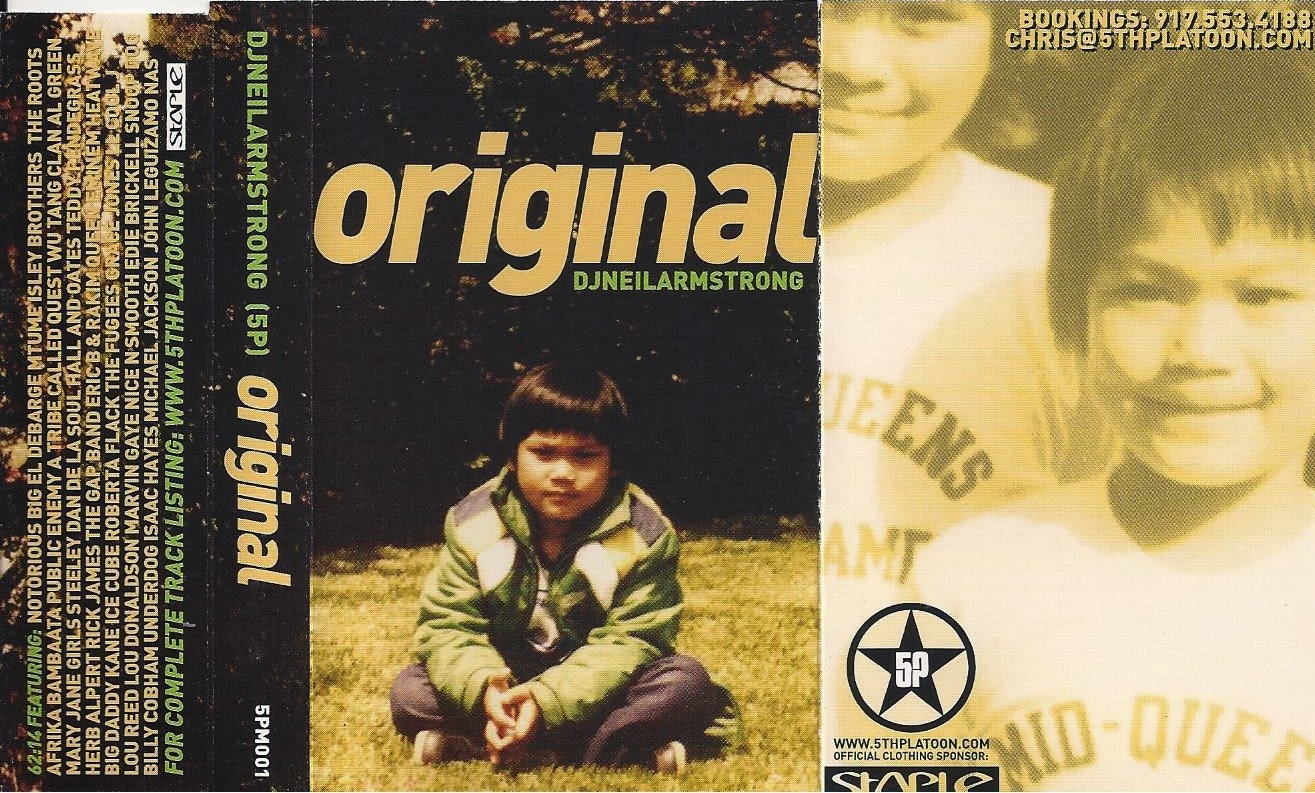 Great tape by Neil Armstrong, mixing up some classic Rap jams with the tracks they originally sampled. Not as clinical and flawless as Riz's seminal 'Live From Brooklyn' but this is put together in a more party rocking way and lets the tracks play for a bit longer.

After I'd converted the tape to MP3, I had a google and it looks like Neil remastered it so its available digitally if you look around, or you can cop the CD here .The tape rip is a bit rough around the edges but still listenable. 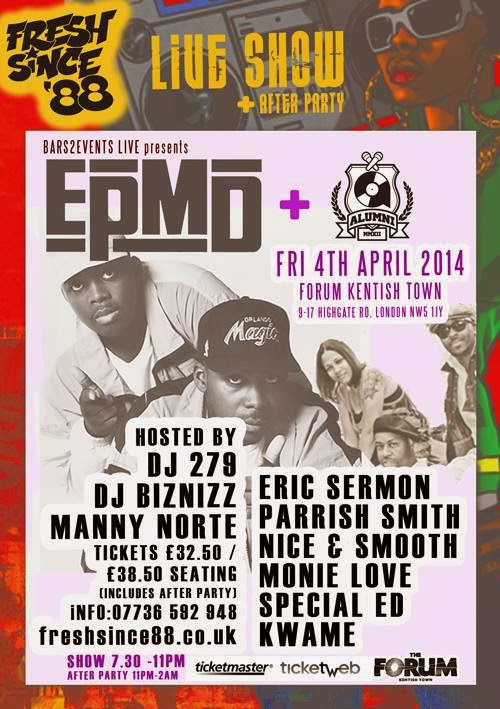 One for the old heads. Special Ed and Monie Love is a nice touch but Kwame performing in London might just be the most random booking of the year! 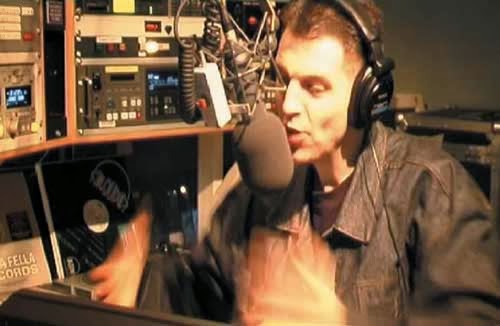 No date on this tape but I'm going with early 1994 (could be late '93 though). Ladbroke Grove's Cash Crew are in the studio plus there's tunes by MOP, Wu Tang, Gang Starr and Big Daddy Kane.
Jay The Sultan checks in from NYC for the rap report and drops a sneaky snippet of 'Life's A Bitch' over the phone and there's a some classics by EPMD, Ultimate Force and Eric B & Rakim. Lovely.

Shout to Junior Pepaseed once again for this one. 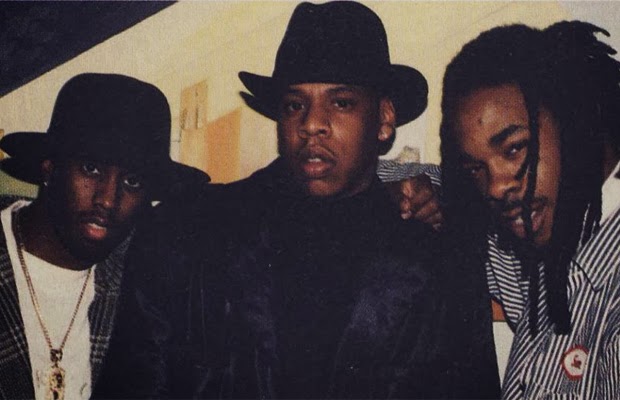 This is a special 'Songs That Shoulda Done Been Included On (Different) Albums' edition. It's inspired by something I read in HHC years ago that suggested that if 'Fight The Power' had been recorded less than a year earlier, it could've replaced 'Party For Your Right To Fight' on 'Nation Of Millions...' , thus making one of the best albums ever pretty much unfuckwitable.
Rap as a genre is full of "looseys". Tracks that as a result of poor A&R decisions, sample clearance issues and just being recorded at the wrong time, were never able to attach themselves to an album and so - up until just over ten years ago - were often overlooked by your average Hip Hop consumer, perhaps denying them being certified classics in some cases.

With that in mind, theses tracks would've been ideally been included on the following albums*...

Ghostface 'Guerilla Hood'
from Theodore Unit '718'
should be on: The Pretty Toney Album
The standout track from the otherwise forgettable Theodore Unit LP, not including 'Pretty Tony Shoulda...' as that's essentially off De La's The Grind Date LP. Anyway, 'Guerilla Hood', first heard in a muffled and possibly unfinished form with Kay Slay bellowing over it (the initiation process for any potential street classic) would've slotted in nicely alongside The Pretty Toney Album's gullier moments such as Run, Biscuits and Metal Lungies.

Run DMC ft Prodigy & Nas 'Queens Day'
from Run DMC 'Crown Royal'
should be on: Stillmatic
Nas is probably the biggest offender for leaving great tracks off albums but I'm going with Queens Day in this instance because I love it and it's inclusion on Run DMC's 3rd (third) comeback album meant a lot of people slept on it. I first heard it when Westwood played it in 2000 but as Crown Royal didnt drop until 2001 Nasir could easily have swiped it for Stillmatic. We'll ignore the fact that Prodigy got dissed on there.
I'm always down for a track with a soulful piano led beat and reminiscing-on-back-in-the-day type lyrics. Especially when it could've replaced 'Braveheart Party'.

Dr Dre ft Snoop, Kurupt, Daz & Rage 'Puffin On Blunts...'
from Dre Day 12"
should be on: The Chronic
Obviously. Maybe not in its 9 minute form but you can cut off the last few minutes of adlibs at the end and stick this on side 2 on The Chronic. As much as I love that album I always felt it was a bit heavily weighted towards side 1. This would balance things out a bit and give one of Kurupt's best verses a more suitable home.

The LOX ft Biggie 'You'll See'
from Cant Nobody Hold Me Down 12"
should be on: No Way Out
A personal favourite since it opened up the classic Bad Boy Mixtape Volume 3. I went on to become a big fan of The LOX and Jadakiss and Biggie was already in his prime back then. Unfortunately 'You'll See' was confined to promo 12" status. The label of that 12" states that the A-side - Puff's 'Cant Nobody Hold Me Down' - was due to appear on "the forthcoming album entitled Puff Daddy and The Goodfellaz" which I assume became 'No Way Out' (which you may recall was to be titled 'Hell Up In Harlem' at one point). This shoulda done been on that. It's one of the standout tracks of 1996 and it a wider audience deserved to hear it in better quality than the mixtapes and bootleg 12"s allowed. Quite what the pop audience that copped Puff's LP on the strength of 'I'll Be Missing You' would've made of it is another thing but stick it alongside I Love You Baby, Benjamins and Young Gs and it's a wrap.

Royal Flush 'Rotten Apple'
from 12" single
should be on: Ghetto Millionaire
Royal Flush's 'Ghetto Millionaire' album is one of those 90s LPs I played alot at the time that I think more people need to know about. After he'd caught people's attention with 'Movin On Ya Weak Production', the Nas sampling 'Rotten Apple' was the one that started building a buzz for the album. Unfortunately it didn't make the cut. Whether that was down to sample clearance or not I don't know but the promo still sells for respectable money even now which speaks volumes.

Jay Z 'In My Lifetime'
from 12" single
should be on: Reasonable Doubt
I like Reasonable Doubt alot. I can honestly say I was one of those who bought it when it dropped, mainly on the strength of 'Brooklyns Finest' and 'Dead Presidents'. 'Ain't No Nigga' however, stands out like a sore thumb on that record. I liked it at the time and it was obvioulsy a huge club record which along with its appearance on the Nutty Professor soundtrack effectively launched Jigga's career (that and the envelope of cash he gave Kevin Liles to push the track) but 'In My Lifetime', which had appeared on a Payday Records 12" a year earlier is much better suited to RD's overall vibe.

*obviously once CDRs, MP3, Spotfiy etc appeared things like this were made possible to a degree but you see know what I'm getting at. 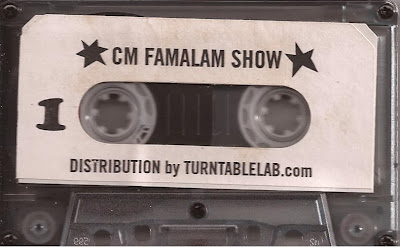 Not too much talking on this one, just 90 minutes of DJ Cucumber Slice with special guest DJ Noize dropping a load of underground joints by the likes of Group Home, Rasco, Planet Asia, Thirstin Howl, OC and Saukrates.

Shout to JPS once again for this one. 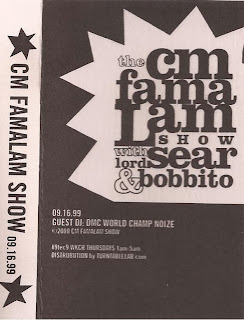 Before record labels were reduced to no more than a logo using whatever font Kanye West had recently made popular, they dropped mixtapes to promote their roster, forthcoming releases or in this case, launch. On this tape DJ Enuff showcases The Neptunes at the height of their powers with tracks from Clipse, NORE, Roscoe P Coldchain (still a Top 5 Rap name), Famlay, Missy and the like.

Even Britney and Nelly sound pretty good in the context of this mix (assuming you aren't still being subjected to them once a hour on a daily basis like I was back in '02). Dope intro on this aswell.

This is another one out of the Junior Pepaseed stash. 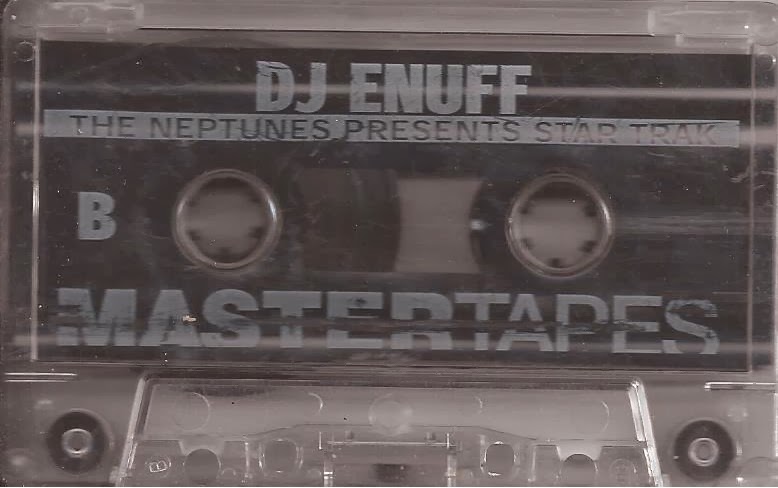 All 90s, all remixes mix. Some well known, others are a bit more slept on or obscure. All seemed to fit together nicely given that it was an off the cuff, one take thing. Enjoy...