17 years ago this past weekend the M-O-B-B appeared on Westwood's show. Prodigy proceeded to go in with a 15 minute freestyle which I've kindly seperated into the 3 tracks you see above. Hearing him over The Lox's 'Fuck You' is a highlight.

If you want to listen to the whole show that those freestyle are taken from, you can find the first hour here. Part 2 with Fab 5 Freddy is here and part 3 with Prodigy, Havoc and Alchemist is below

When you see your average generic American rap fan online debtaing their Top 5 rappers, or asking who the GOAT is, it's pretty much always the same fucking names. Having listened to helluva lot of Mobb Deep in the last few months (party because I was making this mix, which I highly recommend if you haven't checked it) I would say that Prodigy at his peak should definitely be in that conversation, but that rarely seems to be the case.

With that in mind, if you missed them... 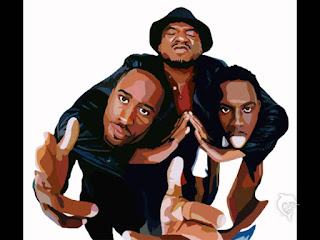 Here's a couple of blends I cooked up using 2 ATCQ joints, the first one is the 1nce Again acapella over the Crooklyn instrumental (which is produced by Q Tip and Ali). I was never a massive fan of the original 1nce Again beat and remember being quite underwhelmed when it appeared as the lead single for Beats Rhymes & Life. The Crooklyn beat gives it a bit more bounce imo.

The second one is Stressed Out over the Dead Presidents instrumental...

These were originally intended to be part of a 'mid 90s blends' mix I was putting together that never got finished, so I might post what I've got so far up as individual tracks over the next few weeks and months.
Posted by step one at Saturday, April 22, 2017 No comments:

Before that brief period around 2005ish when Papoose was rolling with Kay Slay and Jive Records and looking like the next big thing, he was down with Kool G Rap. This freestyle is taken from an edition of New York Live on the Radio 1 Rap Show around the time G Rap's Roots Of Evil was due to drop. The full show is below, featuring A+ in part one, and Marley Marl hosting The Roots and G Rap in part two

Kool G Rap is performing in London for the first time in ages in June btw.
Posted by step one at Wednesday, April 19, 2017 9 comments:

In the week that Kendrick Lamar became the first person in history to think that a rap album could benefit from Bono appearing on it (in place of the likes of Q Tip if rumours are to be believed) I thought I'd revist some terrible collaborations from the past. Obviously there's a lot so I put some restrictions in place:


- No cross genre collabs. That's a whole 'nother list - the Blade 2 soundtrack, that bizarre Brand Nubian dubstep album, Inspectah Deck and Coolio with Blondie. There's too many to consider.
- No dead rappers. They're dead. They can't help it if their mum thought it would be nice to hear them on a song with Elton John.
- No Wyclef records. He's worked with Tom Jones, Brian Harvey and The Rock ffs. He clearly doesn't care.
- Nothing featuring Mr Hudson. He's another level of terrible and the song inevitably goes beyond being mildy disappointing to something more traumatic and offensive, albeit one that's strangely suitable for sub-par bars and high street retail outlets.

So, here's 5 times when rappers collaborating with other rappers fails to live to up to the sum of it's parts...

First up, the all-star collab:

Biz touches down in the UK for an appearance at the Essential Festival. There's some reminiscing about the old days and a a chat about rare joints  - anyone know what the 'talking version' of The Vapors is? - before Biz clumsily mixes up some breaks (we'll put it down to jet lag) and drops a few of his own tracks with a bit of beatboxing  in between.

I edited out the beginning of the show as there was about 25 minutes of Biggie and 2Pac tunes, followed by Tim debuting Jay Z's 'Izzo' by playing it 2 times in a row, and a total of 4 times in the 3 hour show. Method Man and Teddy Riley's 'Party And Bullshit' also got played twice and that really isn't a very good song. You do get a Break To The Beat segment though which I thought had been done away with by the 2000s. Maybe it was because Biz was in the house.

Puffy on Westwood's show from around the time 'Forever' dropped. He's also got Shyne with him, and it turns out this was the show that this freestyle went down on. Whole load of Bad Boy tracks get played, and then part two finishes off with the recording of Biggie performing at the Radio 1 Rap Show launch party in London back in '95. 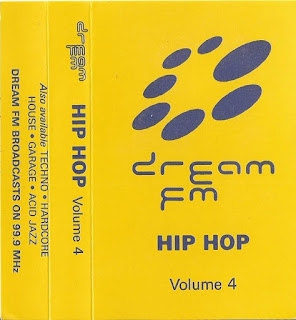 As far I know, Dream FM was a pirate station in Leeds that broadcast through the mid 90s. This isn't a recording of a show so I assume it's a mixtape used to promote the station. There was no DJ name on the cassette or the cover but the paper insert with the tracklist (see below) tells us it's "mixed the fuck up by Greenpeace" bka Dan Greenpeace aka Dan Large of HHC/Fat Lace fame, DJ Yoda collaborator, All City Show host and these days Dubai based concert promoter. Some top notch '93 selection for you... 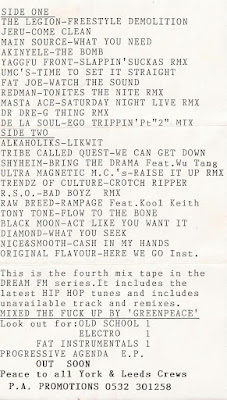 There's no sign on Discogs of that Progressive Agenda EP unfortunately.
Posted by step one at Tuesday, April 04, 2017 No comments:

Westwood live from Sylvia's in Harlem (2003)

A ridiculous line up of guests on this show. You can find the first 90 minutes with Ja Rule and Sean Paul here, but the second half  is where it's at with Timbaland, Busta Rhymes, Noreaga, Kardinal Offishall, Freeway and TOK all passing through.

And here's the Freeway freestyle over In Da Club

NB: at the start Westwood says Busta will be on the following night's show, but this was a Saturday (there was no show on a Sunday) so I'm guessing this wasn't actually broadcast live and they forgot to cut that out of the edit.
Posted by step one at Saturday, April 01, 2017 1 comment: