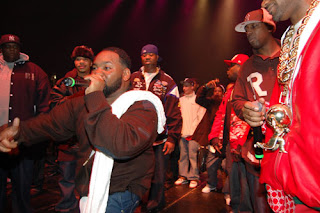 Wu Tang freestyling live on stage from 1994. My tape isnt labelled but I have a feeling this was in London.
Some of the beats and rhymes are similar in places to the Capital Rap Show freestyle I posted a while back so its definitely from that era after '36 Chambers' dropped and before the Clan's solo onslaught began.

The first time I saw the Wu live they all walked off stage at the end except Cappadonna who stood alone centre stage and did his verse from ‘Winter Warz’ (one of my favourite verses ever) acapella. Awesome.
Posted by step one at Thursday, April 02, 2009