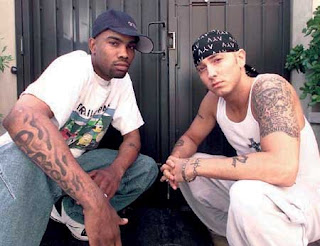 This weekend marks the third year anniversay of Proof's death. I was never much of a D12 fan but Proof is a beast on the mic and I would have loved to have seen him have the opportunity to do more solo stuff. HHC recently ran a feature on Detroit Hip Hop and all the artists interviewed acknowledged his talent and contribution to their local scene.
This is one of a few freestyles he dropped alongside Eminem on Tim Westwood's show during a trip to the UK in 1999. They go back and forth for 10 minutes over LL's '4321' instrumental with punchlines and quotables for days...

"I found out where Canibus' money went, I borrowed a dollar from Wyclef.."
DOWNLOAD HERE

I should have another freestyle from this show to post soon. RIP Proof.
Posted by step one at Wednesday, April 08, 2009