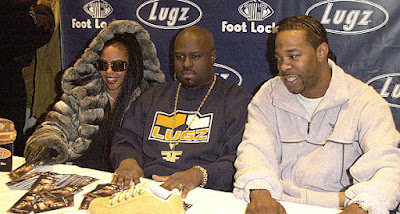 The first thing to say about this show is that it starts with Christina Aguilera dissing Eminem over The Real Slim Shady instrumental (a song which was possibly the start of Em making really bad records). If she could rap on beat it might've been bearable but she can't so it just sounds terrible, however I think we can all agree that in 2017 a new Christina song is likely to bang harder than anything Eminem can create at this point. Seeing all these high profile rap DJs, journalists and "influencers" feel the need to have an opinion on the Eminem album and acting like it's a surprise that it's really fucking awful is just baffling to me.
Anyway, once that's done Westwood hands over to Flex who has Lil Kim in the studio. That's followed by Busta Rhymes in part 2, who's heavily plugging the release of Anarchy. They're really pushing the singles Get Out and Fire to the extent that if you ever needed evidence of payola this wouldn't be the worst place to start, although if I recall these songs never really blew up on the same scale as Busta's other lead singles. His run of club bangers from '96 to 2006 was equalled only by Jay Z, but there was a bit of a dip on this project. Fire ain't bad but didn't really catch on and Get Out sounds a bit too Hard Knock Life-ish. The real gem on the album is 'The Heist' with Ghostface, Raekwon and Roc Marciano over a Large Pro beat. One that the backpackers probably missed when it dropped and are now being charged big bucks for the German promo 12" , probably due to the J Dilla produced A-side.
Weirdly, this show also contains Flex cutting up a bunch of 80s classics, which is the same mix that was previously broadcast a few years prior (like, '96 or something). I know this because I posted it before.