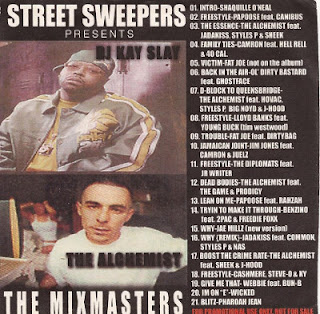 I copped this on Canal Street on a trip to NYC in 2004. Looking back it seems like that year was New York's last stand, before the South and eventually everywhere else took over. This CD is essentially a promo for Alchemist's 'First Infantry' album. As you'd expect, Mobb Deep, D Block and Dipset are heavily featured on here so it's generally a good listen, but the Papoose and Canibus freestyle over the Guerilla Monsoon Rap instrumental might be worth skipping if you're feeling a bit fragile and/or suffer from migranes as it's not for the faint hearted or irritable. Time and a place and all that.

Mixtape CDRs being what they are the quality of this has deteriorated a bit over the years so I ended up culling the last couple of tracks.

On the same trip to the States, I managed to record Kay Slay and Alc alongside Black Rob on Hot 97
Posted by step one at Sunday, December 17, 2017