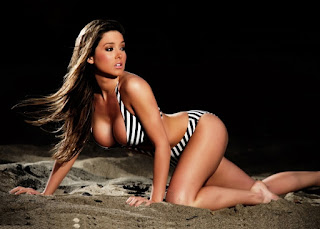 Just over a year ago I dropped a post with a few non-Hip Hop mixes. The picture that accompanied it was responsible for a significant amount of hits in the following months so I thought that if I was going to do again it was only right we gave Victoria Moore (her above with the guns/expression combo) some more time to shine. Anyway, as I just re-upped all the links on the aforementioned post here's the second installment...

If you like that kind of thing check my peoples Groove Motion for some cheeky re-edits and original tracks. Tell 'em I sent you.

Finally, if you pine for the days when Drum & Bass nights weren't full of students wearing Vans and shutter shades and remember a time when Radio 1 DJs wouldnt touch a jungle tune with a license payer's bargepole, then you might enjoy the stack of tapes I've ripped recently:

DJ Hype @ Helter Skelter: Energy 96
The first rave I went to and one of the best sets I've ever heard. MC MC & GQ on mic duties and all the big tunes of the year on this one. Still get goosebumps when I bump this.

Ed Rush & Optical @ One Nation 2001
One of the best sets of the era. Proper tearout business and not for the faint hearted.
Fatman D, 5ive 0, Skibadee & Shabba D on the mic (Shabba annihilates 'Galactic Jam' on this)

DJ Die with MC Det & Shabba @ Innovation's 8th Birthday (2002)
More Shabba. This was another favourite back in the day.


I'm still working through all the old posts and re-upping everything. Hoping to have it all back to normal by the end of the year. If there's anything you want in the meantime then holla.
Also, I'm still doing my thing on Kane FM but I'm just doing once month (every 4th Sunday) for now. May well be back to fortnightly in a few months so stay tuned.
Posted by step one at Saturday, December 01, 2012