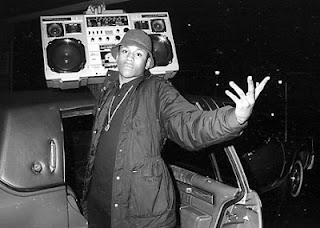 This past weekend I was fortunate enough to meet up with the homie Tobes who was generous enough to hook me up with a stack of tapes from the early 90s containing all sorts of treats, and first up out of the collection is this gem.
LL performing live at Chuck Chillout's birthday party back in 1990 is pretty dope in itself. He rocks 'To Da Break Of Dawn' over Keni Burke's 'Rising To The Top'. You're downloading already right?
He follows that with a new joint that to my knowledge is still unreleased (some quick tweets to J Zone, DJ Rhude & the DWG boys seem to confirm this). Its a tough 'Amen Brother' sampling track that I've named 'She's Rockin'. As far as I can tell its the full studio version being played off a DAT, with LL intermittently rhyming on top of the vocal track. My theory is that it might have sounded a bit dated in comparison to the rest of the 'Mama Said Knock You Out' LP so it got shelved. Anyway, here you go...

Because I'm nice, I've included 3 seperate files: one for each of the 2 tracks, and one with whole thing.
Before anyone asks, no I dont have anymore from that night than what's here.