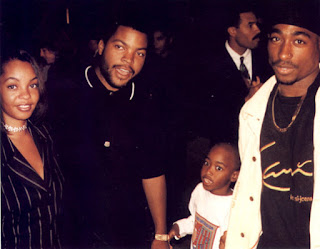 #1 - Black Rob should've been on 'All About The Benjamins' instead of Sheek Louch or Lil Kim. Not hating on either of their verses but in 96-97 no-one's removing Biggie or Jada off a track so someone's got to bounce. That beat would've suited Rob down to the ground.

#2 - Ice Cube would've stayed in NWA, released 'Amerikkka's Most Wanted', appeared on 'Efil4Zaggin' and then left the group. This scenario ensures we still get AMW and 'No Vaseline' aswell as Cube over beats like 'Appetite For Destruction'. '100 Miles And Running' would have appeared on AMW as the posse cut ala 'The Grand Finale' on The DOC's album.

#3 - Suge Knight never bails 2Pac out of jail and as a result the beats for 'Ambitionz Az A Ridah', 'California Love' and 'Hail Mary' all end up on Kurupt's solo album, which features Daz, Snoop, Rage etc, and is to 'The Chronic' what 'Only Built For Cuban Linx' is to '36 Chambers'.

More as and when they come to me. Suggestions welcome.
I was lucky enough to be given a fat stack of golden era tapes yesterday. Looks like there's lots of treats in there so keep checking back as they'll begin to appear over the next few weeks.
Also, I'm on Kane FM tonight from 9-11pm (UK time) playing old rap music. Come join me if you can.