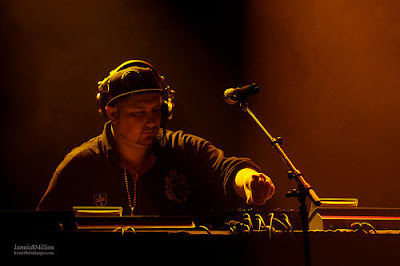 I haven't dropped an interview in a while so here's a quick Q&A I did with DJ J-Love, best known for his mixtapes being packed with exclusives and his work with NYC's Hip Hop elite...

OB4ZL: Who You Be?
I’m the magnificent, glorious J Love. Mixtape Kingpin, MC extrodinaire, producer executioner for Queens, New York and if you don’t know who I am or my history its possible you don’t belong in Hip Hop!

What was your ‘Day One’?
My cousin put me onto Hip Hop when I was a kid. He came through with the sheepskin coat... I was like 7 or some shit and it was banging. I was stuck like, this is crazy and I love it! It might’ve been ‘The Message’ by Grandmaster Flash or Fresh Gordan ‘Gordys Groove’, ‘Pee Wee Herman’ or Schooly D ‘PSK’. As a child I knew that this is what I wanted to do with my life.

Did you roll with a crew or try MCing before you settled on DJing?
Nah, I didn’t run with a crew or nothing. I was always rhyming first but I got intimidated when I was younger, plus there wasn’t a lot of Spanish rappers out there at the time so I gravitated towards DJing and producing. I never left the rhyming alone though and I’ve just released my debut solo album which is out now.
First live show you saw? Maybe Wu Tang in 92 at some hole-in-the-wall bullshit club. When I was too young to go to shows and no one would ever take me I’d just stick on videos and records until I hit my teenage years, and then started sneaking into shit and just went from there. Anyone who knew me knew I always had my walkman and like 10-15 tapes on me everywhere I went. I knew how to fit tapes in my pockets a certain way! I just loved music.

What clubs/nightspots did you used to hit back then?
Mad spots: Showboat in East New York , Palm Tree, Carbon, Fever , Arena, Vertigo, Esso, Homebass. Wherever I could get in as a young’n I was there.

Who inspired you to start DJing and who were your influences at the time?
Kid Capri, Red Alert and Marley Marl were my first inspirations

How hard was it trying to make a name for yourself in the 90s mixtape scene, competing with names like Doo Wop, Kid Capri, Ron G etc. Was the DJ community in NY cool or was there a lot of beef?
I mean, whenever you come into anything no one’s extending their hand or embracing you with open arms. It was harder and you had to grind harder. You had to prove to cats why your shit deserved to be there. The DJs were respected amongst each other and some didn’t like each other. Some good people some bad people. Thats life though.

At what point did you realise you were established in the industry? Was there one particular mixtape or production that got you over?
Hmm, I dont know cause I just put my mind in work mode and keep grinding so I don’t know what the turning point was, but I started to notice the respect and the name buzzing a lot more to the point where I knew I had to work more and more.

You’re primarily associated with that traditional hardcore New York sound. Were you checking for much West Coast or Southern rap back in the day, or now?
I always checked for everything but I like what I like and I'm from New York so I primarily like that sound and I’m happy to rep where I come from. You see how they do it down south with supporting their artists? I always did that for New York. I fucks with the south and the west and everywhere in between but my preference has always been New York to the death.I just like good music wherever it comes from, whether it be New York, Alaska or Australia as long as it bangs.

How did your affiliation with the Wu come about? When I was doing my album in 97, but really just seeing cats in places and building with them and always showing love and support. Eventually it became undeniable and they had to return that. I became Ghostface Killah’s DJ and I have done shows for the whole Wu Tang a few times.

You’re known for having a lot of unreleased and rare shit on your mixes. Is there anything you’re sitting on that you haven’t put out yet?
Tons of music, but I let things go as I see fit. See, I treasure music so it’s a little different for me. Some people might collect hats or some shit, I love music and my collection is nuts!

For every Jay Z and Biggie there’s a rapper that didn’t quite ‘make it’. Are there any artists from back then you feel should’ve got more recognition or had the talent to blow up on a larger scale?
Too many to name but artists like Tragedy Khadafi, Cormega, Large Professor, Roc Marciano, MOP, LA The Darkman, Kool G Rap... They have a name and recognition and a good career but none got to where I feel they should have. There’s tons more, I could go on for days.

How did you feel about how Hip Hop developed through the 00s? The whole DJ/mixtape game changed drastically...
It was good because the mixtape game really got recognized for what it really was. Shout out and rest in peace to Justo, the founder of the mixtape awards. Then it became saturated with a million and one artists and DJs to the point where it all fell apart. After 2004, I wasn’t feeling too much shit anymore cause it started to feel like everyone was following whoever was hot, and lyrics were more watered down. It lost the edge and originality. I mean, you still hear good records but not like you used to and thats why albums don’t last more than a week, or a song is only hot for a couple of days.

What new/up & coming artists are you checking for?
There is a bunch I like and that I’m messing with. Obviously I have my team The Outdoorsmen, which consists of myself, Meyhem Lauren, Action Bronson, AG The Coroner, Jay Steele, Science, Take-It, Prince Original, Animal and Killa Sha (RIP).
Other people I like and that I’m working with are Camiliano, Rasheed Chappel, Maffew Ragazino, Timeless Truth, Spit Gemz and Shazz Ill York. I check for new music cause Im a music fan first so I help and do what I can for people.

What have you got going right now?
I’ve released my album ‘Egotistical Maniac’ and I’m working on my next LP ‘Not Designed To Quit’ which is dropping in November or December. That just embraces my life’s hardships and positive moments. Just life and how I see things .

Anything else you wanna add?
Scoop up that ‘Egotistical Maniac’ LP for now. It features Kool G Rap, Cormega, Ghostface, Trife Diesel, Sadat X, Sean Price, LA The Darkman, Large Professor, Meyhem Lauren, Action Bronson and Roc Mariciano.
Check the website and my YouTube channel or get at me on twitter