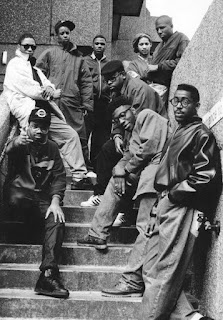 Out of Eddie's collection emerges a healthy amount of early 90s UK artists on rap radio. Freestyles and live recordings taken from Richie Rich's Rap Academy and Max & Dave's show on Kiss FM, and Westwood. Rather than drip feed them I thought I'd gather them up in one big zipfile for you. It's mostly names you'll recognise if you're familiar with that scene although there is a couple of lesser known artists. This era is kind of a niche sub-genre of hip hop and in terms of the history of the UK scene its often overlooked in favour of the 80's golden era (London Posse, Monie Love, MC Duke etc) and the early 00s generation (Jehst, Klashnekoff, Task Force).
Essentially the dance music explosion of the 90s sidelined hip hop for most of the decade in England. I was going to go into more detail but this article covers a lot and is worth a read if you want to know more.
As for the comp, I've posted the two MC D freestyles before, and I think the Caveman one is from somewhere else (?) but the rest is brand new. Enjoy.
DOWNLOAD
Blade - Kiss FM Rap Academy (April 91)
Brotherhood - Radio 1 Rap Show (June 95)
Cash Crew - live in London (Dec 90)
Caveman - Capital Rap Show
Deadly D, Def K & DJ Cel - Kiss FM Rap Academy
Gunshot - Lightning 90.8FM (Nov 90)
Guttersnypes - Choice FM freestyle (Dec 93)
Hardnoise - Live To London (Aug 90)
Honey B & Culture Shock - live (Sept 91)
Katch 22 - Kiss FM Rap Academy (Feb 92)
MC D - DJ 279 special (July 93)
MC D - Kiss FM freestyle (July 93)
Sir Drew - Capital Rap Show promo
SL Troopers - Kiss FM Rap Academy (Feb 92)
Son Of Noise - Freestyle (July 91)
Have to big up Eddie once again for these. If you're sitting on a box of tapes get in touch and let's free the gems!
If you're in the mood for some more classic UKHH then GM B-Eazy just dropped a new mix...
Posted by step one at Saturday, February 06, 2021