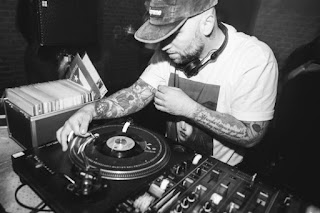 Stepping up next to drop his top 3 mixes is DJ Snips. Currently based in NY, Snips co-promoted and DJ'd at Livin Proof which was one of London's biggest hip hop nights. His production CV includes Trife, Cappadonna, Skyzoo and the infamous Poisonous Poets crew which included Lowkey, Doc Brown, Reveal and Tony D. He's currently in the middle of releasing a new beat every week as part of his 52 Beats project.

DJ Spinna - Live on Westwood (1999) This one always sticks in my head as it was a pivotal time for hip hop when the underground and mainstream worlds were completely divided. It seemed like a breath of fresh air to hear a DJ like Spinna, who was very much a staple in the underground scene, on a show like Westwood's, who by that time would rarely play records from that world.

Kid Capri - 52 Beats What even needs to be said about this? Hip Hop DJing 101. With the introduction of the internet many of these breaks are common knowledge to most people but that wasn’t always the case. I recently named my latest beat tape after this.

This and Stretch Armstrong's 'The Lesson' were the pinnacle of mid-late 90s NY indie hip hop. This tape stands out to me particularly because I used it as a gauge to make my own tapes. I had doubles of most of the 12”s on here and was imitating Premo's juggles as a way to get tighter myself. Seems fitting in hindsight as I did the same thing with his beats when I started producing.