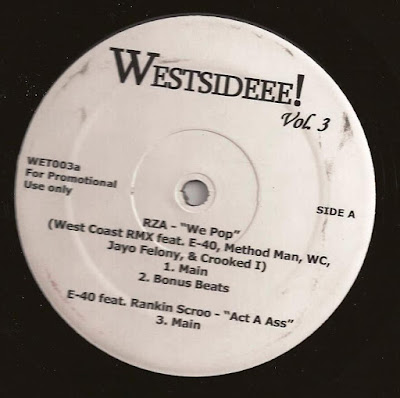 I remember getting the promo 12" for the original version of 'We Pop' sent to me and not being particularly impressed with it. RZA and ODB on the same track with no other Clan members to bring a bit of style and finesse to proceedings wasn't really doing it for me at the time. This remix on the other hand, which surfaced some time later, definitely hit the mark. RZA enlists the stellar line up of WC, E40, Crooked I, Jayo Felony and Method Man to do their thing over the same beat...

The odd thing about this is that it's basically a straight jack of 'Bad Boy For Life', and like that track, its also produced by Megahertz. Not sure what the full story is behind that but RZA does take a sly shot at Diddy with his opening line.


I've only come across the song in 2 places, initially on a Kay Slay tape and then on this bootleg 12", which seems like it doesn't turn up too often judging by Discogs.
Posted by step one at Saturday, May 30, 2015