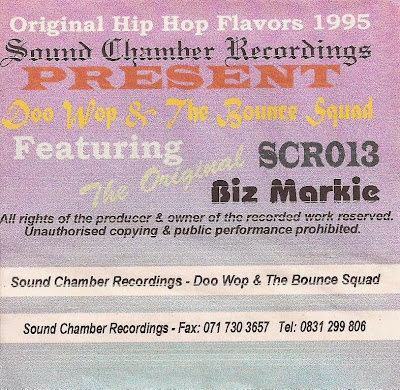 As I mentioned in the previous post, there's a few tapes I posted back in the early days of this blog that needed re-ripping in better quality - 320 rather than 128 kbps for starters. Here's the first of the bunch . A personal favourite of mine (and the first one I ever bought) that I copped on New Years Eve 1994 from Handspun Records in London's West End

Things kick off with an intro not entirely dissimilar to Gang Starr's 'Aiiight Chill' with various NYC DJs leaving answer phone messages for Doo Wop. Then Biz Markie kicks a freestyle before the Bounce Squad get busy over a bunch of different instrumentals, which is always a highlight. The track list for for the rest of side A reads like a 'best of the mid 90s'  with joints by Craig Mack, Keith Murray, Pete Rock, Redman and Biggie but my favourite part is still the mix of The ? Remains into Mad Izm ("1-2-3 BOUNCE!")
The B side begins with a blend of Mary J's 'Be Happy' over Flava In Ya Ear, followed by Dogg Pound & Jodeci's 'Come Up To My Room' into some Big Daddy Kane, Black Sheep, Bas Blasta, Champ MC, Artifacts, Outkast and even Biggie and Ra's 'Cunt Renaissance'. I highly recommend this one.

(NB: Fall Flavour 94 isn't mentioned anywhere on the cover or the cassette itself and for years I called it Original Flavour 1995 so if you've got that sitting on your hard drive somewhere then bin it and get this instead)