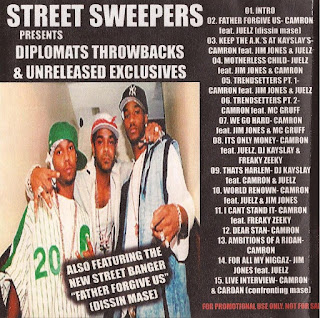 One of a stack of CDs purchased on a trip to Canal Street back in 2004, this Street Sweepers set collates some of the Dip's finest mixtape moments...

Highlights include the demo version of the unreleased 'That's Harlem', which I later found with an added chorus on this Rocafella promo 12", an always welcome appearance by Herb McGruff on 'Trendsetters pt 2' and the superbly titled 'Keep The AKs At Kay Slays'.
My personal favourite is 'World Reknown', which appeared on 'Come Home With Me' as 'The Roc (Just Fire)' with Memphis Bleek and Beanie Sigel replacing Jim and Juelz.  Although everyone turns in a worthy performance on both versions, Jim Jones really stands out for me with his verse. Its obviously debatable as to whether he wrote it but put that to one side and he presents a solid argument against those who lazily tag him a wack rapper based on 'We Fly High' and 'Pop Champagne'.
Admittedly he's helped by the beat. The Just Blaze production is one of the best of the era and is one of those instrumentals I never tire of, where you get the feeling it could make anyone that rapped over it sound amazing.
Posted by step one at Saturday, February 09, 2013