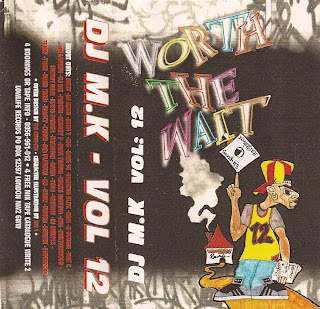 Quality mixtape right here from London's DJ MK. This was probably the first place I heard the 'next generation' of UK artists like Fallacy, Skinnyman and Roots Manuva, who would go on to be huge a few years later. Some good US stuff on here aswell from DITC, All City and Tribe. 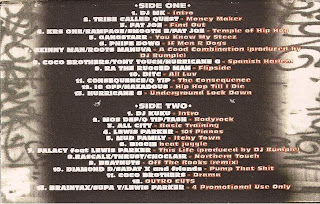 Here's a bit of info on the tape from the man himself...
POINTLESS BUT TRUE FACTS ABOUT THIS MIXTAPE !

1 - The comedian Russell Peters used to hook me up with promos and gave me my copy of "Northern Touch"
2 - All the freestyles were recorded in one night at my flat using Braintax's studio. I made Roots Manuva a pizza as he was hungry and had no money at the time. Skinny man smoked the flat down.
3 - The cover was drawn by the world renowned Parisian graffiti artist KAY ONE.
4 - Tony vegas gave me his copy of the only test pressing at the time of "Itchy Town" I gave it it's 1st play on a mix i did on Choice Fm for 279 and also put it on this mixtape. Tony also gave me his spare DMC mixer, which i used to record this mixtape on - MK

Catch MK alongside Harry Love plus guests streaming live from The Funhouse every Monday to Thursday night from 9pm UK time
Posted by step one at Saturday, October 23, 2010