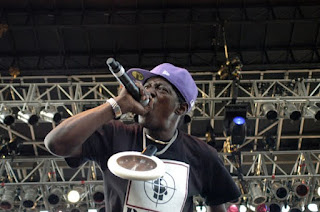 This 1995 recording of Public Enemy live at The Phoenix Festival in England was recently broadcast on Sirius XM.

I was especially pleased to see this as I was actually at the show. Memories are pretty sketchy as it was a long time ago ( I was 16) but I remember getting into an Island Records tent and meeting Chuck & Flav, aswell as - randomly - Mark Lamarr, and getting a poster and CD signed which then got nicked out of my tent. Also on the bill were Ice T, The Roots, Guru/Jazzmatazz and a load of other people.

Thanks to Dan at Philaflava for hooking up the link.
Posted by step one at Saturday, March 24, 2012