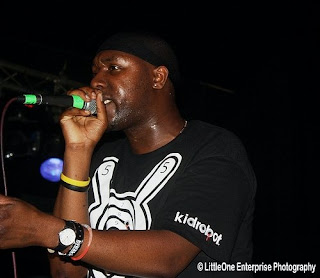 Following on from the DJ 7L feature last week, I've approached someone a bit closer to home to speak on their introduction to the rap game and memories from back in the day...

My name is Kyza, aka Mr Sayso aka B.L.A.C.K. A.D.A.M. I’m from Ladbroke Grove, London and I’m best known for being the best member of Terra Firma, one 4th of Orphans Of Cush, and an all round nice guy.

What was your ‘Day One’ as far as Hip Hop goes?

Day one in Hip Hop for me was my older brother having Eazy E ‘Eazy Duz It’ and ‘Gangster Chronicle’ by London Posse. I knew all the words to both albums and I thought that it was amazing that there was such a word as “motherfucker” - I’d never heard it before I listened to rap. I thought it was amazing! It had power. That’s what made me want to hear more of the culture that came natural to me. I was used to softness like De La, so when I heard the gangster ting, I was captured.

Who inspired you to start rapping and who were your influences at the time?

To be honest, my influences to start rapping were Nas, my older brother, and Klashnekoff. I’ll be honest again: I got into rap properly REALLY late. I was a rare groove, 80’s pop/rock and soul baby. That’s why when I first started to listen to rap and then rap after, I hit the ground running.

What was the Hip Hop scene like in London in the late 90s? Were you a regular at nights like Kung Fu, Mudlumz, Flavor Of The Month etc?

The scene wasn’t oversaturated with the fuckeries and utter wank you see now; you had to be of a certain calibre. Certain rhymers and crews stood out and there was no room for mediocrity. There wasn’t any of this “Any Guy bars” that’s being passed off as acceptable these days. What people refuse to understand is that just cause a person spits “hard” it doesn’t mean that they are good. I paid my dues regularly at Kung Fu, Mudlumz & Flavour Of The Month. You can ask ANYBODY from DJ Excaliber to Ruffstylz, DJ 279 to Westwood. I was there on my own sometimes. I think even before people heard me with Klash, they knew I weren’t to be played with when it comes to the pen and the mic. I was ravenous! Certain times when we used to finish shows and Klash was too tired to buss a bar or he straight up didn’t want to, he’d say to me and Skribz “Go on. Buss it” and I’d unleash Duppytamers on peeps. New lyrics ALL the time. I paid my dues B, real talk.

On ‘Lucozade Bottles’ you mentioned going to Westwood’s parties at The Temple - any particular memories from those?

I have too many memories to recount. The friends I made, the chicks I linked, the open mic I won...too many. It was a street crowd, but there was no hype. People were still road, but knew what time it was. We all wanted to go to a dance and have fun, wild out to a couple tunes and get a phone number or two or three or four. You had tunes like TLC ‘No Scrubs’ and Destiny’s Child ‘Bills Bills Bills’ getting played alongside greasy road anthems like DMX ‘Stop Being Greedy’, Big Pun ‘Twinz’, N.O.R.E ‘Banned From T.V’ and Busta Rhymes ‘Tear The Roof Off’. It was amazing, and they’d switch it up with the Bashment section which was ideal since me and my goons were only there to get pussy and listen to rap - what more could you want from a rave? I think the lot who went to the Westwood jams back in the day are now the same ones in the club on a baller flex now. They’ve prolly got families now and don’t get out much and have priorities, but when they rave they’re more on a big people flex and get super dressed up instead of slam dancing in tracksuit bottoms!

Favourite artists back then?

The UK rap scene seemed to take a bit of a hit when things like Jungle and Garage blew up and a lot of people ‘jumped ship’ – did you ever consider getting involved with other genres?

I NEVER, repeat NEVER EVER considered jumping over to the other genres. I knew in my heart of hearts that Garage had a short shelf life. It got to a point where I felt dumb listening to it. It was dance oriented, not to listen to for rhymes. I’d go to a garage rave - and I did VERY frequently - to look for pussy, get lean off my face and dance. Thats all! I didn’t want to hear anyone chatting over it until So Solid made it at least a bit tolerable - ‘Oh No (Sentimental Things)’ was a VERY big tune. After that, it went downhill the same as most genres do when the rich white men in suits flash money at it. Craig David? Honestly? That’s what garage gave birth to?...ok then. (I’m now watching BO! Selecta)...hahahahaha!!

At what point did you start trying to get your music released and was there any people in particular instrumental in helping you?

I took it seriously in 2000-something when I co-founded Terra Firma. Klash was popping with ‘Daggo Mentality’ and ‘Zero’. I knew Harry Love from school so something was bound to happen. Klash, Jehst, Harry Love, Lewis Parker, Michael Parkunsun, the Foreign Beggars, Joe Budah, and the lesser known but vital producers of my first and second project, are the ONLY people in the game I owe something to.

You were around and appearing on a lot of big records during what’s often considered UK Rap’s second ‘golden era’ – what memories stand out from that period in the early 00s?

Once again, TOO MANY to count! The Falling Down tour with YNR was very memorable - people who were on it will tell you why! I was wild with the chicks. Terra Firmas’ first show at Kung Fu when “Murda”/”Parrowdice” came out; I was on top of the world. Alongside ‘High Plains Drifter’ and ‘Gangster Chronicle’, ‘Sagas Of Klashnekoff’ is arguably the best record to come out of the UK to date in black/rap music, for that era I mean. I’ve encountered everybody in this game when Terra had the top spot, from Professor Green to Plan B to Labrynth (who actually used to be in Terra Firma). From Lowkey to Sway, who I used to have giant rap cyphers with including the rest of the One Crew - Jargon and Ricochet from Universal Soldiers. Like I said B, I paid my motherfuckin’ dues.

What did you make of the way Hip Hop developed through the 00s?

I wouldn’t say its evolved, I’d say the opposite. It has changed though. It devolved into grime which is the lovechild of UKHH and Garage. Its called UK Rap now isn’t it, or “Road Rap”? foolishness...On the flip side, all the artists that have done well are from that scene. Every man has the right to tell his story and share his music with the masses. That’s why I defend the grime scene from attack because it started in the streets by young black youths who I can identify with and relate to, to some degree. Also, it has its own way of doing things by way of the hustler mentality which UKHH never had. We were very lazy and still are compared to them. I think that the grime scene needs to step up the level of play on the rhyming field though and we as UK Black music (sorry I don’t say ‘urban’ because it devalues what it REALLY is) need to stop getting hypnotized by the flashing lights and dough and take back what is ours from these bitch-ass bloggers, industry geeks and so-called tastemakers and stop THEM telling US what is cool in OUR culture. “Fuck a rap critic/He talk about it while I live it” - Meth said it best.

Erm to be honest dude, I don’t have much going on these days. I have two EPs waiting to come out but I have no idea if they’ll see the light of day due to certain situations, which is why if they do, I will no longer continue to make anymore type of music in any shape or form after that. I’m happy with the trail I’ve blazed. I could walk away with my head high knowing that I absolutely duppied EVERY TRACK I was heard on. Let the new ones do with it what they will. It’s their game now…

Big thanks to Kyza for taking time out to chat.
If you aren't familiar with the man then here's a few tracks that I strongly recommend you check out

For more info on Kyza GO HERE
Posted by step one at Thursday, February 03, 2011