This was a bit of a big deal at the time. Previously the Rap Exchange shows had given us 2 hours a month of Flex's show in NYC but this time he'd come to the UK to (relentlessly) promote his first 60 Minutes Of Funk mixtape and play at Club UN for the 1st anniversary of Tim's Radio 1 show, which started in December 94. What we got was two 3 hour shows of Flex mixing interspersed with Akinyele and Sadat X freestyles as they'd accompanied him on the trip, having featured on the mixtape's lead single Loud Hangover. I've posted some bits of these recordings years ago but thought I'd better throw the whole 6 hours up before the blog is done.

I remember being at home with a really shitty cold listening to this live on both nights (often I'd record and listen back the next day) and I'm pretty sure this was the first time I heard California Love and Woo Hah. I also wrote down the entire tracklist at the time but can't quite bring myself to type it up yet.Suffice to say that with that much time to do his thing, Flex runs through pretty much everything. Alongside the new music there's golden era classics, breakbeats and some R&B. 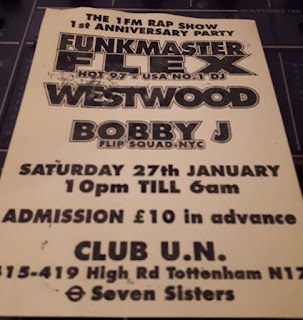