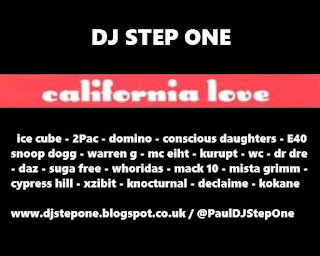 First of the month, so as is now tradition, here's a new mix. Strictly West Coast rap this time out. Mostly 90s with a few early 00s tracks, and not too heavy on the anthems...

I was definitely more into the West Coast sound in my early days of listening to Hip Hop, and save for the obvious tracks I didn't really get into the Large Pro/DITC/Premier side of things until the mid 90s. This was partly to do with availablity as so many releases weren't given a domestic UK release back then and even if you could afford an import copy you had to find one first. No easy task in deepest Surrey. Anyway, once I was old enough to get into London and buy my music I was mostly buying East Coast stuff. London's record shops and radio was very NY-centric and once Dre and Snoop left Death Row and 2Pac died the West didn't really have anyone high profile enough to keep the momentum going. Basically I probably missed out on a lot of good music. I've trying to make up for lost time recently. Soundtracks seem to be a good source of deep cuts but if anyone can help me make sense of the numerous Dogg Pound releases, 2Pac bootlegs and which of the Spice 1 albums are any good that would be much appreciated. Enjoy the mix.
Posted by step one at Tuesday, November 01, 2016