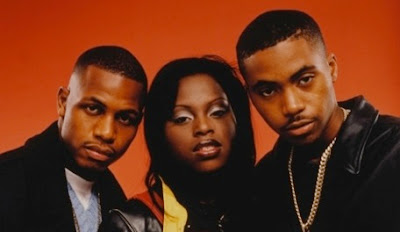 As you might already be aware, a recent collaborative effort on the Philaflava forum resulted in a reconstruction of The Firm album, re-imagining the track selection as it should've been. It's one of those releases thats generally considered a bit underwhelming, mostly due to it being less than the sum of its parts. The highs are high but the lows aren't really what the people involved should have put their names to in 1996. During the course of the discussion, the subject of 'La Familia' was raised. This was a song I'd kind of forgotten about since having it on a Future Flavas tape back in the day, but it turns out it's only official release was as a clean version on Foxy Brown's 'I'll Be' single, and Cormega's verse had been replaced by one from Nature after the group's line up changed. Save for a couple of mixtapes and poor quality youtube rips, the original was nowhere to be found. You can probably see where this post is going.
A quick check on my shelves turned up this bootleg 12" with the uncensored version featuring Cormega. So here it is. Shout out to DJ Filthy Rich for cleaning up the pops and crackles for me.

The Firm: How It Should've Been

The 12" is well worth picking up if you see it, as it also includes the original version of 'Benjamins' without Biggie and 'You'll See' (another promo only Bad Boy track). The Tracey Lee/Canibus/McGruff joint is also unreleased.
Posted by step one at Thursday, July 21, 2016