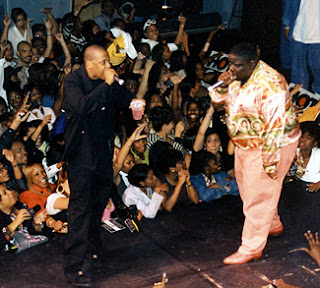 Another one of those tracks that I've edited down to my own liking. I don't really have any problem with Puffy's rapping  as he usually has the sense and money to employ a decent ghost writer, but I always thought this track went on a bit too long. Here you have it with just Biggie and Jay's verses.

In hindsight it's kind of strange that these two on a track together was just a relatively low key album track at the time but that's resulted in it having a longer shelf life. You could say that the removal of Puff puts this on an equal footing with DITC's 'Day One' (I think that dropped first but couldn't be sure - it certainly wasn't the first time a DITC creation had been jacked for a Bad Boy release). Either way, Frank White and the dude from the My Kinda Girl remix both bring their A-game here. This also serves as a reminder that there's a lot to be said for subtle choruses and relentless, nagging hooks need not always be the order of the day. Rap Purists might not not have Twitter birthday parties for No Way Out's release date anniversary, but the 3 track sequence of Young Gs, I Love You Baby and Benjamins is up there with the best of them.

Just waiting on The Martorialist to request a Puffy solo version now.