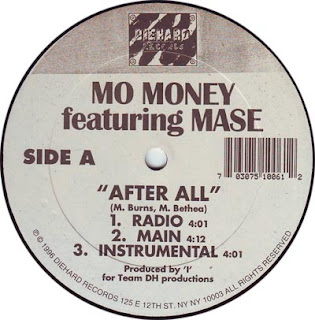 I've been keeping an eye out for Diehard Records releases after taking a punt on Mo Money & Genovese's 'The Block Hot' (as featured on my Tape Kingz Vol 1 mix). It turned out to be a good buy so when I saw this record for cheap I scooped it up. The label says it came out in 1996 but with the sample straight jacked from the SOS Band's soul classic, it could just as easily have been on Bad Boy circa 97-98. Polish it up a bit and it could pass for a Trackmasters production from that era...

I should probably mention that the sound on this is a bit off as although the record was still sealed when I bought it, the hole in the vinyl is slightly off centre. Its most noticeable in the chorus but basically its still listenable. If anyone has a better copy hook it up.
Aswell as the wayward hole, the vinyl itself is hella thin and floppy (:pause:) but I digress. I recently checked out their 'Lost N Yonkers' compilation from 1998 and although the production and mastering of tracks is pretty rough and raw (as in 'sound like they were pressed up off a Clue mixtape' raw), there's a couple of gems worthy of your attention.
It won't surprise me if once all the early-mid 90s DITC style boom bap joints have been mined to death that random jiggy rap like this becomes the sub genre du-jour for the rap collector who has everything. God knows they cant keep buying songs they already own on 7" forever.