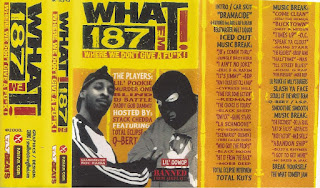 Dope tape by the late great Roc Raida. The tracklist is standard golden era fare (which wasn't as played out back then) flawlessly mixed and blended, interspersed with a couple of guest routines from Q-Bert and Total Eclipse, plus various skits from the hosts of WHAT187 FM and the sort of humour that was ubiquitous on turntablist mixtapes back then.