Only Built For zShare Links presents:
Doo Wop - The Best Of Da Bouncemaster 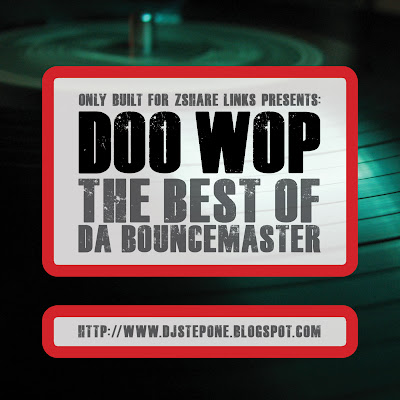 I've been wanting to drop a compilation like this for a while. This is a collection of some of the highlights of the career of Bronx mixtape king Doo Wop , probably the best DJ-on-the-mic and not a bad producer either. There's some great stuff on here, alot of which never saw an official retail release.

So you've got a couple of freestyle intros from his tapes (incidentally these are also the first 2 mixtapes I ever purchased, on New Years Eve 94, from DJ MK at Handspun Records when it was on Oxford Street) followed by 3 tracks from the aborted Bounce Squad album. 'Gotta Go Down' was the b-side of the legendary 'Break A Bitch Neck'and the 1998 Freestyle is taken from the Diaz Brothers mixtape (aka 'Hip Hop On Wax' which I posted here recently). The 'Rockcreek Park' sampling 'Things I Do' was a promo 12" taken from the Flip Squad album and feaures sometime collaborator Don Blaq. 'Ten Tape Commandments' is, as you've probably guessed, Wop's take on the Biggie classic and was a 12" release that has the Raekwon collabo on the flipside. 'Henny & Coke' is an East Coast take on 'Gin & Juice' and 'Not A Game' is from the 'Gangstas Paradise' mixtape. The set concludes with another remake, this time of 'One Mic' where Wop speaks on the ups and downs of the mixtape game.

Many thanks to my man dirt dog for coming through with the artwork.

Doo Wop interview with Unkut.com
Posted by step one at Monday, May 16, 2011