"Its ridiculous, nobody bust one shot for BIG..." 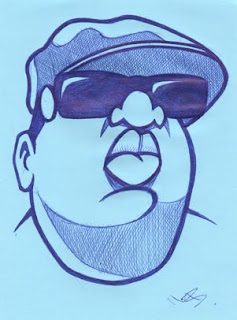 I try and avoid following the pattern of most other Hip Hop blogs but as the Biggie and Craig Mack freestyle on Westwood was one of the first posts that got this site some attention, along with the fact I actually remembered it was March 9th today, I thought I'd drop a couple of B.I.G related things for you.
Pretty much everything Mr Wallace recorded has already been heard already (although the holy grail seems to his collabo with Onyx and Naughty By Nature - anyone holding that apart from Puffy?) so instead I'm gonna break tradition and come with something a bit more recent.

This is a mammoth posse cut by Busta Rhymes, Maino, Red Cafe, MOP, Uncle Murda, Styles, Sheek & Lil Cease called 'March 9th'. Produced by the UK's Dready, this is probably the most fitting tribute to Biggie. It sounds like it hasn't been mastered/mixed down properly but its still great anyway - nice and rowdy and a million miles away from 'I'll Be Missing You'. Not sure if this ever came out 'officially' but if anyone has a better copy then hook me up.

If you want an interesting read on the story behind the whole Biggie/2Pac thing, realniggatumblr got something for you.