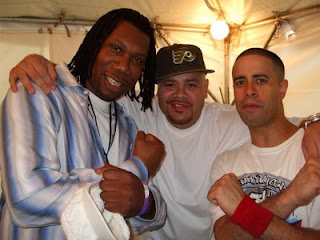 I've been told there's a vinyl release of this recording of the 1993 Rocksteady Anniversary. It must be pretty rare though as I've never seen it listed anywhere. (edit: found it on Discogs).Fortunately Westwood played it one night and I had the tape rolling.
KRS drops a freestyle, Mad Lion performs 'Shoot To Kill', Grim Reaper kicks something, Fat Joe rhymes over Redman's 'Tonites Da Nite' beat, followed by KRS doing a verse of 'Sound Of Da Police' and to round it all off Lord Finesse spits an acapella dissing Lords Of The Underground. I love this...

Cant believe it took me this long to get round to posting this. Needless to say, if anyone has the full recording let me know.