This was a tape I played to death but hadn't ripped until now. I've actually already posted a different recording of the show that Diablo gave me, which had the segments with Mobb Deep, Nas, Raekwon and Lil Dap in the studio. This new rip has the interviews cut out (I think I saved the freestyles on a separate tape) and is just Flex in the mix for 90 minutes. It's been pause buttoned here and there but this is how I remember it... 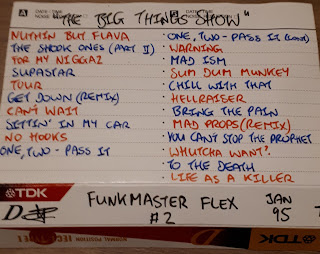 
and here's the Mobb Deep and Nas freestyle

at some point I'll edit the 2 together and get that up on the Hip Hop Radio Archive
Posted by step one at Tuesday, December 17, 2019