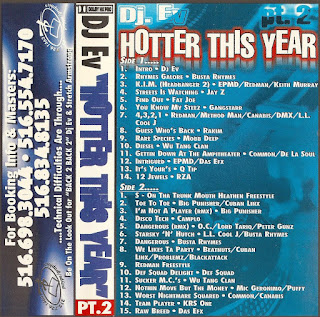 Man like Diablo came through with another box of tapes out of his insane collection so guess I've got enough reasons to keep this blog active for the foreseeable future*. DJ Ev mixes are always good so this was one of the first tapes I went for...

As with every mixtape from 1997 it includes You Know My Steez which is no bad thing. I heard that LL and Busta collab on a Westwood tape recently and it's not half bad all things considered which makes me wonder if the Phenomenon LP is actually a bit slept on. I mean, it has Father on it which prevents it from any kind of classic status even if the rest is 5 mic stuff but I might give it a listen at some point.

Speaking of Westwood, the mixcloud archive is still very much on and popping (and not every tape will get posted here) so keep an eye on that and get in touch if you have any shows to share


*The 1000th post where I said I'd probably stop was the most hits and comments in ages, the posts since then were back to normal. I don't do it for the comments but that's still weird to me. You lot are weird.
Posted by step one at Sunday, May 12, 2019