The LOX 'Kiss Of Death' (unreleased) 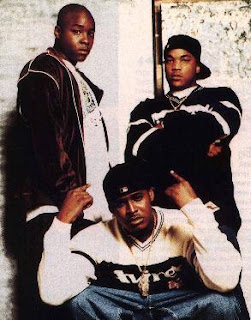 Inadvertantly came up on this the other day after adding it to a Discogs order without really knowing what it was. Turns out its not Kiss Of Death off the first Ruff Ryders album (which is what I was hoping for) or the track of the same name off the second Jadakiss album. What we have here is an apparently unreleased LOX track which I'm guessing is from sometime in the late 90s...

I'm guessing its from that era mostly due to the design of the label which is similar to a few other unofficial released from that period. Also, the fact its under the name 'Goodfellaz' makes me think it might be something the group put out while they were still under contract with Bad Boy, during the well documented Let The Lox Go campaign when they trying to move over to Ruff Ryders. It's definitely the sort of grimey mixtape joint they'd have gone for when they were trying to get away from the whole shiny suit image. It sounds as though it might not have been mastered propely thats all part of the deal with these things.
If anyone has got any info on it drop knowledge in the comments. Also, if anyone can confirm that a 12" of Kiss Of Death from Ruff Ryders Vol 1 definitely exists that would be splendid. I've heard the instrumental at the beginning of this Cipha Sounds mix on Westwood so it must be out there in some format. The fact there's 2 songs (and an album, plus the track above) with the same name makes searching for it a bit awkward.
Posted by step one at Tuesday, June 07, 2016