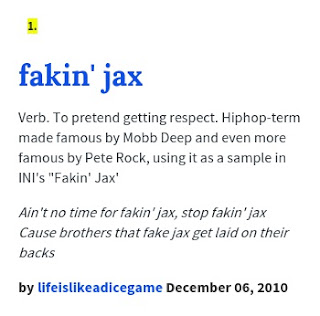 As promised, here's the Frankenstein remix of INI's 'Fakin Jax' that appears on the flip of the Method Man remix below (shout to ego trip for spreading the word on that one)...

Always thought that the mid 90s INI material was a bit of a step sideways for Pete Rock after his streak of classic and genre defining productions in the years previous, It's solid enough head nod boom bap and maybe he just wanted to take a step back from the sort of high profile artists he'd been working with (its worth remembering that although he's held up as an icon of Real Hip Hop by the purists, he made a ton of money remixing the likes of Johnny Gill and Alexander O'Neal). He definitely fell a few steps behind the likes of Premier for a while.The fact the INI album got shelved probably didn't help matters but you can't help thinking he might have ended up working with more A listers if he'd taken a different path after the split with CL Smooth. Wonder if anyone has mentioned to him that it'd be a nice idea to release all his Future Flavas remixes in some of format?
Posted by step one at Saturday, November 07, 2015