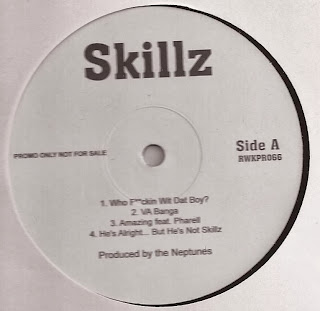 The career of (Mad) Skillz has been a strange one. After a promising debut in '95 he got lost in the shuffle in the late 90s, only to re-emerge at a time when fellow Virginians Timbaland and Pharrell were running the clubs and radio. Collaborations followed and Skillz bagged himself a deal with Rawkus, yet somehow despite having the 2 biggest producers in the game on board, he failed to blow. Rawkus disappeared not long after and aside from a couple of 12"s, all that was left to show for it were the tracks on this promo EP. A mix of freestyles over Neptunes beats and some original tracks.

Some of them eventually got an official release a few years later on Skillz' 'Confessions Of A Ghostwriter' album but the moment had passed and he's since carved out a career with his regular end of year 'Rap Up' and touring as Jazzy Jeff's hypeman. So in comparison to alot of his 90s indie contempories he ain't done too bad I suppose.
I've got a few other loose Skillz freestyles from this era that I can zip up if anyone wants 'em. 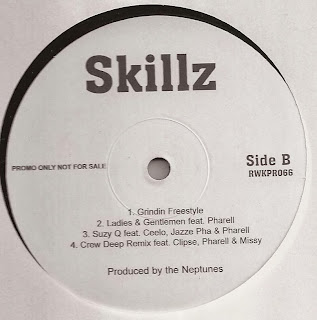 I'll try and get back to posting more frequently but can't make any promises. I'm off up t'radio in a bit for tonight's Infinite Hip Hop Show,  9-11pm on Kane FM. Special guest mix by Jorun Bombay. Tune in if you can.