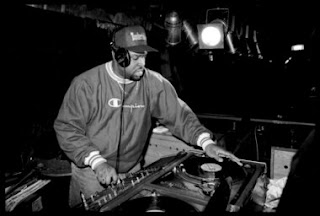 The April 1996 edition of Westwood's Rap Exchange. It was around this time that there was a beginning to be a shift from the traditional rougher East Coast sound to the more club friendly joints that started to dominate Hot 97's playlist through 97-98. 'Aint No Nigga' was the biggest record in NYC at the time and Foxy Brown's buzz was building (she drops a freestyle on this tape) but Flex's selection should still appeal to the purists: Sadat X, Redman, INI, Group Home and Paula Perry all feature...

The photo above was taken by David Corio at infamous London venue Subterrania in September '94. He's got some nice pics over there so go take a look.