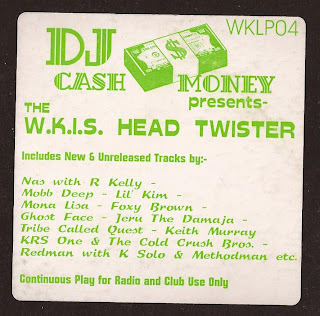 The practice of pressing mixtapes onto vinyl is a strange one. The continuity you get from a tape/CD is disrupted on something like this which is spread over four sides of two 12"s. That aside, I've uploaded it in 2 parts and you get Cash Money cutting, juggling and blending some Nas, Redman, Wu Tang, Mobb Deep, Lil Kim, Keith Murray, Tribe, KRS One and more.

This was a must-buy today, partly because I've got a thing for less-than-official looking releases and also because it appeared to contain a track I've been trying to ID since 1997 when I heard Jazzie B play it on his Kiss FM show. Having got it home, it turns out I was right and its this, which I duly purchased. That was made all the more satisfying by the fact it was a fucking nightmare trying to get around London today as TFL see Sundays as the ideal opportunity to shut down parts of the tube for repairs.
If you cop stuff from this blog regularly hopefully you appreciate the effort that goes into getting some of this shit. In this instance, earlier today this record was festering in a Soho record shop, surrounded by Pitbull promos and discarded Twista 12"s, and now its online for you to enjoy.
Posted by step one at Sunday, April 03, 2011