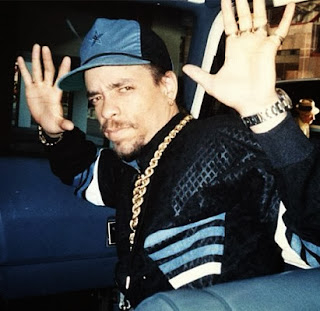 #1 Ice T shoulda done embraced G-Funk. I'd been a huge fan since 'Power' dropped in '88 but 1993's 'Home Invasion' remains one of the most disappointing purchases of my youth. In the aftermath of the LA riots and the Cop Killer controversy I'm sure I wasn't alone in expecting a big return from Tracey. Ice Cube and Dr Dre had set the standard and upped the ante for West Coast rap albums in the early 90s but  Home Invasion delivered some distinctly unremarkable beats and contrived shock tactics that fell well short of the classic status of his previous 3 LPs. One thing that would've improved things significantly is some nice sleazy G-Funk synths to underpin his rhymes. Ice dropping one of his classic storytelling joints over something like 'Black Superman' or 'Thuggish Ruggish Bone' would've been a nice send-off before he departed for Hollywood (we'll just pretend that 'Return Of The Real' doesn't exist).

#2 On a 'Home Invasion' related note, Jay Z shoulda done got Ice T on a '99 Problems' remix, or at least shouted him out on the original.

#3 A 'Superthug' remix. For the record, I'm not really saying this shoulda done happened, more that I'm suprised it didn't, given the late 90s/early 00s trend for all-star versions of big singles. An ideal line-up on the remix could've featured MOP, Big Pun and Beanie Sigel. A more realistic version would probably have included Busta Rhymes and DMX. Still, we had Reservoir Dogs, Banned From TV and John Blaze that year so there's always that.
Posted by step one at Friday, November 08, 2013