Some 2004 Friday Night Flavas for you, with a few Wu Tang members on the phone and tunes by Jadakiss, Masta Ace, Masta Killa and Lloyd Banks, as well as 'Cry' by Swiss which must be the best So Solid Crew related track by some distance.

Liking this Love Unlimited sampling track 15 minutes in. Thought I recognised the rapper but turns out it's someone I've never heard of.

Always happy to come across a Black Rob freestyle I haven't heard before and that's exactly what happened on my drive to work this morning when he popped up in the middle of a Future Flavas show from 1998. Shout out to DJ Diablo for hooking me up with this and a bunch of other FF shows.
Posted by step one at Thursday, October 26, 2017 No comments:

This was one of the first tapes I posted when I started the blog in 2009, but it was in 3 parts, with the first part of side 2 cut out and the whole thing was at 128 kbps. Here's the full tape at 320. Still not a huge fan of the Bounce Squad live bit at the beginning of the side 2 (not the most polished live show you'll hear and it's a bit shouty) but the blends that make up the first part of the mix are all fully on point. Classic mixtape business from a time when it wasn't just about getting exclusives. 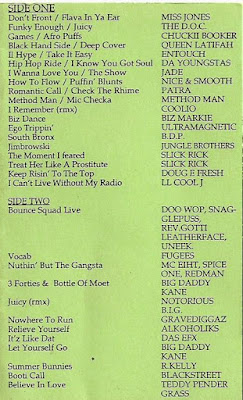 According to a comment on the mixcloud page this tape is also known as 'Sandy's Birthday'. My Tape Kingz cassette has no mention of that so I'll stick with the title on the cover... 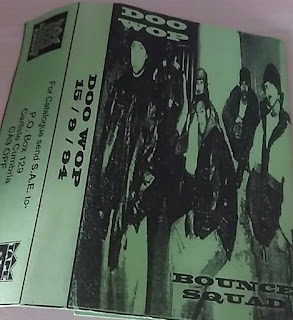 17 years ago yesterday this is. Lots of future hits in part one, with Ante Up, Cold As Ice, Gravel Pit, What's Your Fantasy, Shake Ya Ass and Where I Wanna Be all making early appearances on the UK airwaves prior to hitting the mainstream playlists. Ms Jackson is on here too and that didn't hit the UK Top 40 until 4 months later which seems mad but that's how terrible UK record labels were with rap music back then.

Part 2 has a phone interview with Ice T and Notts crew Out Da Ville are in the house.

Or in this case just Bobbito as Stretch hasn't turned up yet. Looks like this is another one that's been uploaded elsewhere in the past which is good because it means that I'm able to give it a date and give you a link to the track listing. The Cheesecake track at the start is dope.
Posted by step one at Sunday, October 15, 2017 2 comments:

I put together this selection for the car and thought I'd share it on here. There's album cuts and indie joints and maybe one or two things you'd slept on or never heard before. Didn't go nuts with the mixing but it flows reasonably well. Enjoy.

This started off life as me wanting to do something with the Redman and Luniz cuts. The Junior MAFIA track is a recent discovery as I'd never heard the album, but it turns out there's a few nice bits on there. The SOP joint features a pre-Missin Linx Problemz and Black Attack on a lovely understated beat with no hook and earlier this year it became the most expensive record in my collection (I'm not one for splashing out on vinyl usually) after I upgraded from the bootleg compilation I had it on, and treated myself to an original. The Rakim track was a favourite that did the rounds on the bootlegs of his '95 recordings that never found their way on to a proper album. I'm not a huge Co Flow fan and only really found out about Juvenile Techniques when I was listening to some old Stretch & Bobbito shows last year and was feeling the beat. The PRT track is another recent discovery when I took a chance on the 12" when I saw it cheap. The London Posse tune makes use of the always dope Blackbyrds sample and is one of the unreleased tracks that finally saw the light of day back in 2013.
Posted by step one at Tuesday, October 10, 2017 5 comments: 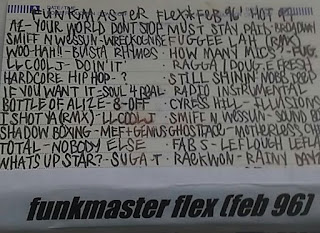 EDIT: Turns out I've previously posted this tape back in 2011 when MK hooked me up a copy but I'd ripped it in 128 kbps and the DL link is long dead anyway.
Posted by step one at Saturday, October 07, 2017 1 comment:


You know the drill for early 00s Westwood by now: Tunnel Bangers in the first half, Cipha Sounds and Jon Shecter on the phone, and then Prime Cuts in the mix with the underground/indie joints in part 2, this time with guests The Creators...

I also recently posted up this show from March 2000 with The Outsidaz in the studio...