First thing to say about this is the quality isn't the best, although once again it's been improved by the Random Rap Radio Remastering Service. It's got that slightly muddy and distorted feel in places that definitely gives off that whole 'rumbling out of a boom box in Camden Market on a Saturday afternoon' feeling from way back in the day.
If it was your standard tape from say, '95 (you know the ones with Wu, Biggie, Nas, Mobb etc) I probably wouldn't have posted it but it's from '92, when the scene wasn't as saturated, and it's also by Triple C who isn't a DJ you come across too often. More importantly it contains some Unreleased Heat ™. At the start of side 2 Triple C announces he's just been in the studio with Lord Tariq, Minnesota and DJ Scratch and then drops the exclusive. There's also someone rhyming on the track by the name of Pete Lova which we can safely assume is Peter Gunz. Now Deja Vu is still 5 years off at this point but Tariq and Gunz would end up releasing a couple of singles as part of Gunrunners (**obscure + expensive indie vinyl claxon**) before Minnesota and Tariq found some success with Money Boss Players, so this demo track is very much the foundation of that whole crew. If you don't have time to check the whole tape I posted the song on Soundcloud.


The discovery of this was made all the more satisfying by it turning up unannounced on a cassette that was labelled as a Radio 1 Rap Show from '99 (cheers G&L!)
Posted by step one at Friday, September 27, 2019 No comments:

Big Ted and Shortee Blitz interviewing The Live Guy With Glasses on their Kiss show back in 2002, when his First Class album was about to drop.

Shout out to Ted for posting this on his blog back in 2011. I thought I'd get it up on Mixcloud for those that missed it first time around.
Posted by step one at Tuesday, September 24, 2019 No comments:

Chubby Chub doesn't tend to get mentioned in the same breath as the likes of Doo Wop or Ron G, and his tapes aren't exactly all over the net, but they have become quite sought after in recent years. This is mainly because a few of them contain some early Jay Z material which still remains unreleased. Chub was rolling with Original Flavour back in the day so he was around Jay and was probably the first mixtape DJ supporting him. This tape has the first version of a demo cut called In The Park, which is pretty short but still of interest given that it seems everything he's had a hand in has been online by now.
On a less multi-billionaire rapper tip, there's also a Buckwild remix of Don't Stress Me by Grand Daddy IU and as far as I can tell that never came out either. Being that it's from (mid?) 1994 the rest of the tape is just splendid...

Thanks to DJ Yoda for the cassette, and shout out to Random Rap Radio for remastering my rip and improving the quality. Not entirely sure on the title for this one. The tape itself just had 7-1 written on it.
Posted by step one at Saturday, September 21, 2019 7 comments:

You know how we do. I'll do the whole album if I have to. I don't need to hear Royce 5'9, Conway & Rapsody or whoever else shoehorned into this.

Not a tape I've ripped myself, but something I recently came across when I was browsing Soundcloud for the first time in ages. Brandan (shout out to Brandan) posted this up 3 years ago so you may have heard it already. To begin with I assumed it would be the show that spawned the infamous Live at The Palladium freestyle that appeared on the Nuttin But Flava 12", particularly as the freestyle on this uses the same Mad Lion instrumental. This is before that though, and is probably the Bad Boy duo's first appearance on Flex's influential Street Jam show. He's asking Biggie where he's from, what name he's officially going under and what label he's on, and he later has the exclusive play of Juicy although as you'll hear from his conversation with Puffy, Unbelievable hadn't made it's way onto his promo CD at this point. Hearing Big drop (at that time unheard) lyrics from Juicy and Everyday Struggle over Impeach The President and Craig Mack following him with Flava In Ya Ear about to hit the streets is a pretty iconic moment so although I don't usually jack content from other people I had to have this one and give it some additional shine. I've edited it down so you'll have to check Soundcloud if you want to hear Flex in the mix for the 50 minutes that preceded this. It was ripped at a really low bit rate unfortunately but it's listenable.

If you don't have time for the whole thing, here's the freestyle...

If you need more Fat Chris in your life Filthy Rich just dropped a Ready To Die 25th Anniversary Tribute mix. Check his Gravediggaz/Organized Konfusion blend project too while you're there.

Also, I'm running low on tapes to rip at the moment so if you've got any an want to share get in touch. I can return them when I'm done.
Posted by step one at Saturday, September 14, 2019 4 comments: 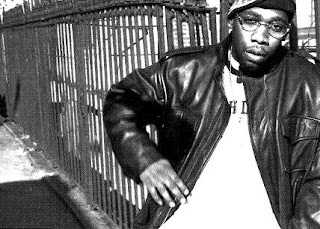 Over the last few years my waning (now pretty much non-existent) interest in new Hip Hop has meant I've gone back and discovered a new found appreciation for artists who I'd previously enjoyed, but perhaps never delved to deep into their catalogues. I've already hit you off with a Sauce Money compilation, and on a similar tip is this Herb McGruff collection.
Signed by Heavy D to Uptown after the rest of his Children Of The Corn crew had found deals elsewhere, McGruff's debut album Destined To Be suffered from his label's attempts to jump on the Bad Boy bandwagon of the moment and have him dropping jiggy club efforts rather than the more thugged out Harlem-centric content that was his strong suit. Kind of understandable given that Uptown properly dropped the ball with Biggie (worst label decision ever in rap?) but history has shown us that the industry has a track record of signing acts with a big street buzz and then getting them to move away from the style that made them popular to chase radio play. In McGruff's case he got off to a good start with the Harlem Kids Get Biz promo 12", but the album had far too many lukewarm, middle of the road joints like Gruff Express and didn't really make much of an impression. What was interesting was the amount of collabs, features, and mixtape only/bootleg tracks that were circulating around the same time, and that's what makes up the bulk of this compilation.

I'm not sure if it was just bad timing, people stealing his ideas or vice versa but Herbert seems to have a issue in the jackin for beats department which probably hindered his progress somewhat. Creep is dope, but it's based around the same break Biggie used on Warning. Nasty with Foxy Brown uses the World Famous Supreme Team beat that's far too similar to the Firm Biz remix which dropped around the same time. Make It Hot has the same Eugene Wild sample recognisable from Foxy and Blackstreet's monster Get Me Home. I've included them all because 20+ years on it's not much of an issue but you can see how it may have been a problem at the time.

I haven't really ventured into his re-emergence with Dipset in the 2000s so its mostly mid-late 90s material, and although it's pretty heavy on collaborations and guest appearances it's a decent representation of the man's work. Pick of the bunch for me is Harlem World with Mase on the hook, which samples Strawberry Letter 23. There's also East And Police produced by Godfather Don off 2008's The Demo EP,  a couple of the better tracks off the album in Reppin Uptown with The Lox and the aforementioned Harlem Kids Get Biz and some looseys like Bow Down with Mob Style and the mixtape only Hell Up In Harlem with Black Rob, Cardan & Cam'ron.

Obviously these were taken from a variety of sources - CD, vinyl, digital, some official, some less so. If you've got anything else that should've been included let me know.
Posted by step one at Saturday, September 07, 2019 6 comments: