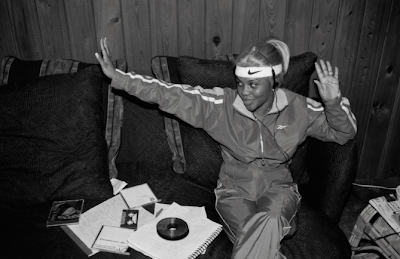 Although I'm not exactly a big fan of Lil Kim, this track grew on me as a result of rinsing DJ Rectangle's excellent 'Deadly Needles' mixtape back in 97.
I got hold of the 12" you see below and was dismayed to find that it was missing Jay Z's cameo, and so wasn't the version included on Kim's 'Hardcore' album. Instead there were 2 mixes, one of which I assume to be the 'original' (edit: see update below) which makes use of the awesome Love Unlimited Orchestra sample also used by Real Live and Jemini around the same time, and one labelled 'remix' with the same beat as the album version. The real talking point is the lyrics that didnt make the cut on the album...


The track features Kim taking a few shots at Faith Evans and 2Pac and must have been (like most/all of her songs) written by Biggie. You can hear his cadence and humour all over it...

"Uh, who shot ya?
Who knows how they got ya?
Fed up...wet up
Maybe next time your punk ass will Keep Ya Head Up!"

I'm not sure but would guess that the lyrics were removed from the official release due to Pac having died just before it came out. Its a bit of an under-the-radar track and well worth a listen. If you're a stubborn boom-bap dinosaur who wouldn't dream of checking for Lil Kim, its all ok because its produced by Stretch Armstrong. Thanks to Addicted 2 Retail for having a decent Kim photo I could use!

UPDATE 16/12/11: Theres a bit more info on this in the comments section from Stretch. After asking a few more questions (via Twitter) it appears he pressed up 500-1000 copies of the 12" himself.
Mike Nice has also put me up on a demo version of this track with Biggie doing a hook to the tune of 'Sweet Dreams' by Eurythmics. This was scrapped after Nas came out with 'Street Dreams' although apparently Kim's track was made first. Also, I've re-upped the files as the album version was corrupted and I've re-titled the 'original' as 'Stretch Armstrong mix'.
Posted by step one at Tuesday, May 24, 2011