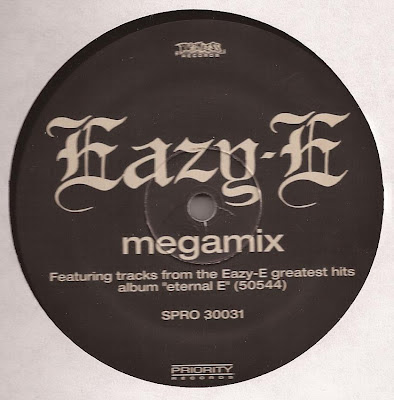 Thanks to The Martorialist for reminding me that today is the anniversary of Eric Wright's death. This seemed a good opportunity as any to re-up this Megamix that dropped as promotional 12" for the 'Eternal E' album.

While 2Pac and the Bigs (Smalls, L and Pun) get a full Twitter timeline takeover on their respective anniversaries, Eazy E seems to be overlooked by the Hip Hop community. Its possibly due to the fact he died of HIV instead of something more glamorous like getting shot the fuck up for no real reason. Also, he'd made his impact before the online generation (for whom Rap starts with Illmatic and Reasonable Doubt) were really paying attention.
All those rap fans who constantly whinge that their favourite artists never gets their due should consider this: Jay Dee (or Dilla if he 'changed your life') gets mixtapes, t-shirts and club nights in his name when all he did was drop a few decent beats here and there and turn A Tribe Called Quest into the blandest group imaginable. On the flipside, Eazy is one of gangsta rap's godfathers, is responsible for the careers of Ice Cube and Dr Dre, and by extension Snoop Dogg. So thats 4 of the best albums of the early 90s under his belt right there, and Ruthless was getting paid off all of that. He also signed Bone Thugs N Harmony, a group who at one point had back catalogue sales rivaled only by 2Pac. If you really want to take it there, you could say he inadvertantly facilitated the rise of Eminem and 50 Cent, and even the fucking Black Eyed Peas. despite being dead by the time all that happened. Imagine a world today, where all those dudes were signed to Ruthless and pay homage!

(NB: I originally posted this Megamix up about 3 years ago without the lengthy pro-Eazy rant)
Posted by step one at Monday, March 26, 2012